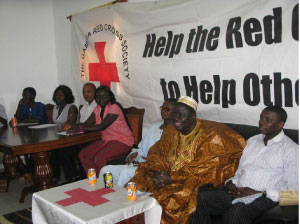 The Gambia Red Cross Society (GRSC) on Thursday received a donation of £1,000 from the Gambia United Association in London to support food security in the country.

The donation was given to support the food security programme launched by the GRSC in April/May 2012 in the country.

Speaking in an interview with this reporter, GRSC’s secretary general Bai Cham said the gift was made possible due to the efforts of Jaliba Kuyateh during his visit to London.

Jaliba Kuyateh is a goodwill ambassador and an adopted father of the GRSC, he said.

“What is important for any donation made to national society is to help alleviate the suffering of some vulnerable people,” said the GRSC secretary general.

Mr Cham further underscored the significance of the gifts, saying the GRSC is currently implementing food security programme to empower the communities to provide their own food.

According to him, they are using funds to support community women gardeners in CRR and LRR. “These food security operation areas are assigned to us by the Gambia government to help those who were affected by the food security crisis,” he explained, revealing that they do not have enough money to help everyone but with this gesture it will add up to what they have.

Asked why CRR and LRR, Cham said: “When the food security crisis was declared by the Gambia government, many actors came in, thus partners were assigned to various regions in the country to avoid duplication of efforts.”

This, he explained further, was to help everyone affected, as well as ensure equal distribution to all communities.

Asked about its impact since their launching of the food security programme, Mr Cham posited that since then the GRSC has been able to prevent malnutrition as well famine in the communities.

The Society had also provided seeds to farmers so they could productively cultivate and be resilient, he said, while commending the donors for their desire and objectivity in providing such a gesture. The resources will be put into good use, he said.

He also thanked Jaliba Kuyateh for his time and for appealing for additional resources.

He as well calls on others to emulate such a gesture, saying: “The little help you can provide can have a positive change in the lives of others.”