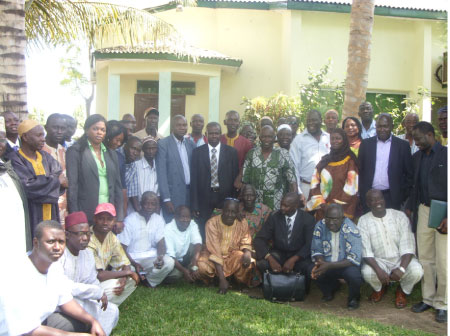 The West African Agricultural Productivity Program (WAAPP) recently gathered stakeholders in the development of agriculture for a daylong review and planning meeting at the Paradise Suits Hotel, aimed at reviewing the implementation of WAAPP project activities.

Present at the forum were extension workers, researchers and other top agricultural officials from the Ministry of Agriculture.

For his part, the WAAPP National Coordinator, Sheikh Tijan Sosseh, said the forum was the long-awaited convergence geared towards bringing researchers and extension workers under a single umbrella, so as to take a new paradigm which is the integrated agricultural research for development where all stakeholders of production or the actors involved in the production cycle converge on a platform, to discuss and share ideas, with the ultimate objective of improving production and productivity.

According to him, the project is funded by the World Bank and the Spanish government at a tune of (USD $ 12million).

“This project is an initiative from the ECOWAS and the objective is to improve agricultural production and productivity in West Africa,” he said.

The Director at the Department of Agricultural Services, Mr. Musa Humma, thanked the organisers of the forum, noting that it’s geared towards pushing the agricultural sector in the best interest of the Gambian farmers.

He then used the opportunity to challenge researchers, extension and all other actors to collaborate effectively in the implementation of the WAAPP, as according to him, the project belongs to the Gambian farmers.

Mr. Ernest Aubee, the Principal Programme Officer and Head of Division-Agriculture- ECOWAS Commission in Abuja, registered his appreciation for the tremendous progress made by The Gambia government in the implementation of the WAAPP project.

Eubee, who used the opportunity to commend WAAPP’s Country Coordinator for ensuring that The Gambia complies with all the requirements for the implementation of the WAAPP, said WAAPP Gambia component has achieved tremendous result, despite the late start of the project.

He then advised the participating researchers and extensions workers to be united in the implementation of the WAAPP, for what he described as the best interest of the agricultural sector, while urging them to re-double their effort as WAAPP Gambia is one of the leading projects in the sub-region.

The forum that attracted over fifty participants was meant to bring researchers and extension workers together under a single umbrella to discuss issues of great importance, with the view to increasing crop production and productivity.