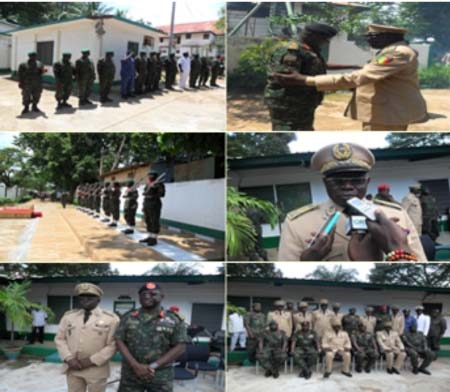 Senegal’s Chief of Defence Staff, Lt. General Cheikh Gueye, is currently in The Gambia on a 3-day visit to his Gambian counterpart and the Gambia Armed Forces.

The Senegalese CDS, who arrived in The Gambia yesterday Tuesday 25 July 2017, is expected to return on Thursday 27th July 2017.

Speaking to waiting reporters after hours of closed door meeting between the two CDSs at the Defence Headquarters, Lt. General Masanneh Kinteh, Chief of Defence Staff of the Gambia Armed Forces, said the discussions they had included how to collaborate in the areas of training to develop each other’s army, peace keeping, sharing information and working on the common challenges they face as people of the same sub-region.

He described the visit as a “very positive step” in the collaboration of the two armed forces.

CDS Kinteh said the two countries are blessed with wise leaderships at political level, adding that the two presidents have given their words to their people that they want to see peace and stability within the sub-region and therefore the armed forces would have to live by those words and try to promote that agenda of cooperation between the two armed forces.

They want to realize that cooperation between the two armed forces, he said, adding that as armed forces there are lots of things they can work on together.

He thanked the Senegalese CDS for taking the initiative to visit them.

Lt. General Cheikh Gueye, Senegalese Chief of Defence Staff, said he is in the country to strengthen bilateral relations between the two countries particularly between the armed forces.

He also said they had discussed how to maintain peace between and within the two countries, since if a problem erupts in one country it is likely going to end up in the others before the end of the day.