The fourth anniversary of the President Jammeh Football Academy in Lamin village, Kombo North District, is set for Friday 3 June 2016, at the Late Sanna Jatta Memorial Football Field in Lamin.

According to the founder of the Academy Mariama Njie, preparations for the four-year anniversary are in high gear.

She said the academy was founded four years ago by herself meant to groom, nurture and develop young talents in Lamin and its environs.

Njie pointed out that she struggled to fund the academy, saying she was fortunate to meet a German couple at Lamin Lodge who took her to Germany.

Njie seized the opportunity to call on the members of the private sector, donor institutions and individuals to support her in order to put her academy on its feet. 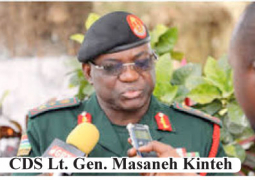