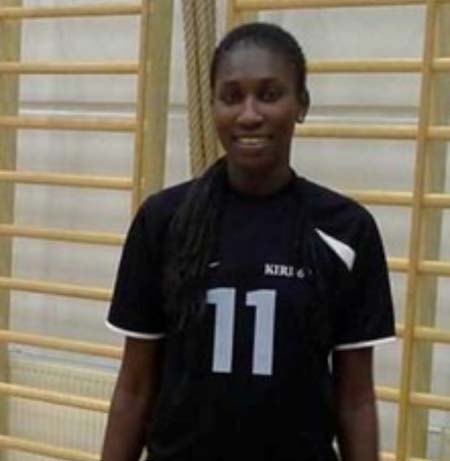 Gambian international Abbie K.S. Barrow has commended The Gambia Volleyball Federation for achievements made in the last 12 months.

Barrow, who stars for Helsingin Kiri-60, a second division team in Finland, said she always feels proud when she reads newspapers commenting on volleyball developments in a soccer-dominated country.

“A lot of success has been registered and I will confess that the performance of the female beach volleyball team really inspired me,” she said.

“I was part of the team that travelled to Senegal for the women indoor All Africa Games qualifiers last August and there were lots of praises from the girls.

“The allowances were paid on time and for the first time I received that huge sum of money for allowances and the girls even confessed to me that they received more when they participated in the first rounds of the Rio beach volleyball qualifiers.”

But what are her challenges? The 1.83m middle-attacker explains: “For me my biggest challenge against the Federation is for them to get a standard calendar.

“The calendar should be respected and this will help the players because as you can see there is no off season for the players, as we are completing this league we are preparing for the beach volleyball and other international engagements.”

She added: “When there are international tournaments and few players are selected, that should not stop our ongoing league.

“So I think it is very wrong if players are selected for national side and the rest sit waiting for them while they are away enjoying national duty: that is unfair and unprofessional.”

Previous:
SHE SHE SHE: FGM bill passed, what is next?
Next:
Solar lights for Jafai Kuta village