The Gambia Investment and Export Promotion Agency (GIEPA) on13 June 2011 conducted a Regulations Stakeholder Forum at the Paradise Suites Hotel in Kololi.

Speaking at the opening ceremony of the forum, Ms Fatou Jallow, CEO of GIEPA, said that since the agency came into being almost a year ago, they as board members, management and staff have been working towards putting in place internal structures that would help them implement its mandate.

“For the Investment Law to be implemented in the most transparent manner, there is the need to have in place regulations that would provide the various processes and clarify any grey areas that the Act may have,” she said.

The GIEPA leading hand also said that 2010 they worked with stakeholders and came up with draft regulations that were later found to be short of international best practice, hence the reason for re-engaging all stakeholders with the assistance of an international expert on the subject matter.

“Lessons learned from the implementation of the GIPFZA Act have been the cornerstone of the new Act and the same lessons should be considered in the drafting of these regulations; of course taking into account the current dynamics of our country and our competitors,” she stated.

She continued: “Since the Investment Laws and eventually the Regulations are country marketing tools targeting all sectors of the economy, it is crucial that the inputs of all stakeholders, public and private sector, are taken into account and we have regulations that do not only reflect international best practice but also cognizant of our local environment.”

Momodou Lamin Ceesay, deputy permanent secretary at the Ministry of Trade, Industry, Regional Integration and Employment, speaking on behalf of the permanent secretary, said: “I am delighted to join you today in a forum that my Ministry has been looking forward to for a while.”

He added that his ministry places high hopes on the outcome of the forum in aiding the country’s policy drive to having in place a well-drafted set of investment laws and regulations.

“The investment outlook for The Gambia is positive,” he noted. “We have witnessed steady increase in foreign direct investments over the years and with the new GIEPA Act 2010 and Regulations, it is our hope that we can cement the gains registered by attracting more value-added investments.

“The policy environment is conducted and the new GIEPA Act came into being as a result of the need to remain competitive both within the sub-region and the wider world.”

Mr Ceesay noted that for the first time in The Gambia, the Investment Law has recognised the need to decentralise the growth and development prospects around the country through the specific provisions of additional investment incentives for investments registered in the Regions outside the urban areas.

According to the Trade ministry DPS,  there is obviously the need to have a strong Investment Regulatory Framework which aims to improve transparency with investment policies and provide regulatory guidelines which remain fundamental in attracting both foreign and domestic investments  as well as providing the necessary support to develop the export base of the country.

“GIEPA must continue to work with all stakeholders to lay a strong foundation for the long-term attractiveness of The Gambia as a destination for both foreign and domestic investments with the aim of improving our competitiveness,” he stated.

Ms Fatou Sinyan Mergan, Chairperson of GIEPA Board of Directors, chaired the ceremony. 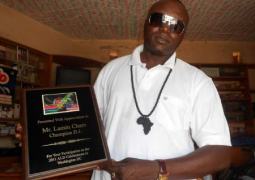