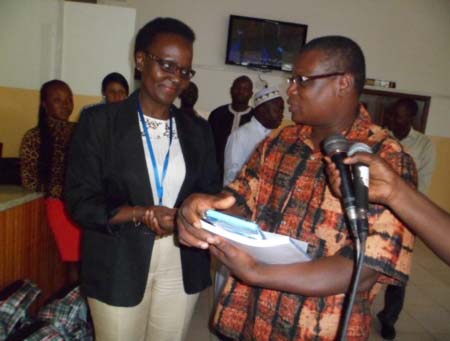 UNICEF recently handed over materials and equipment for the Integrated Management of Severe Acute Malnutrition to strength the capacity of health workers for effective services delivery.

The items were presented to the National Nutrition Agency (NaNA) and the Ministry of Health and Social Welfare at a ceremony held at NaNA office.

In his welcoming remarks at the event, Bakary Jallow, deputizing the executive director of NaNA, said The Gambia adopted the WHO Protocol on the Management of Severe Malnutrition in early 2000 when a regional training for senior nurses and staff for English-speaking countries was conducted in The Gambia.

Since then, he added, The Gambia has been implementing the severe malnutrition programme in the country.

“The program was ongoing very smoothly with the support of donors including UNICEF and in collaboration with the Ministry of Health,” he said.

According to him, since then they have been working with partners to ensure staff are trained.

He noted that their major partners in the implementation of the programme are UNICEF, who are supporting the Gambia government on combating severe acute malnutrition, and the WFP, on fighting moderate malnutrition.

He noted that the collaboration between the Government of The Gambia and the two UN agencies led to the procurement of equipment and supplies intended for the facilities that will be implementing the protocol of severe acute malnutrition.

Jallow, on behalf of the Office of the Vice President and NaNA, expressed appreciation to UNICEF and the WFP for providing support to The Gambia in the fight against malnutrition.

She said global acute malnutrition nationally was at 9.2 per cent with the regional variations, whereas there are local government areas like Janjangbureh, Basse and Kuntaur with rate above recommended WHO threshold of 10 per cent.

According to her, it was then they realized there was need to strengthen the capacity of health workers for effective service delivery in case management.

She said that based on that, UNICEF was working closely with NaNA in revising the protocol, which is in line with international standards and the protocol on management of malnutrition.

According to her, UNICEF deems it fitting to give support to NaNA and the Ministry of Social Welfare with materials and equipment for the integrated management of severe acute malnutrition.

She also noted that the donated materials would strengthen the capacity of health workers and communities in managing malnutrition.

Dawda Ceesay, deputy permanent secretary at the Ministry of Health and Social Welfare, applauded UNICEF for the gesture.

Noting that this is a big achievement for the Ministry of Health and Social Welfare, he said malnutrition is a major concern for the health ministry.

He used the opportunity to express appreciation and thanks to UNICEF and the WFP for the support while assuring them that the items will be used prudently.