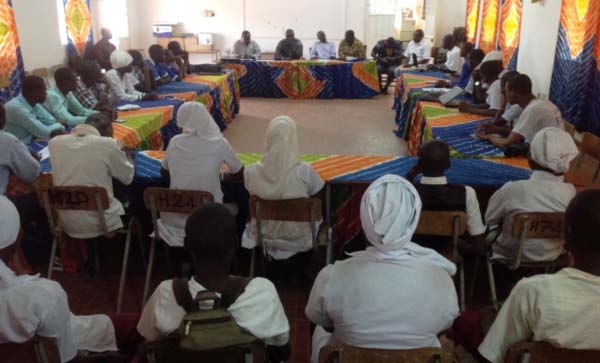 Promoting intellectual dialogue, social cohesion and a culture of peace and non-violence and supporting the education systems in response to contemporary challenges for Education for Sustainable Development (ESD) in schools in The Gambia was the center of discussion for rural students on Thursday in Mansakonko. The two-day workshop gingered interactive dialogue among participants from the UNESCO Associated Schools Project Network (ASPnet) in the Lower, Upper, Central and North Bank Regions on the invitation of UNESCO/NATCOM of Banjul.

The network, which celebrated its 60th anniversary in 2013, obtained membership of institutions ranging from pre-schools, primary, secondary and vocational schools to teacher training institutions to work in support of international understanding, peace, intercultural dialogue, sustainable development and quality education in practice.

In his welcoming speech, Yahya Al-Matarr Jobe, National Coordinator of UNESCO ASPnet and Secretary General of the Gambia National Commission for UNESCO (NATCOM), dilated on the areas of focus for the ASPnet project and activities.

The event, he stated, marked the beginning of the implementation of a UNESCO-funded project for the Gambia associated schools project network ASPnet for the 2012/2013 biennium in Gambia.

Precisely, he went on, this project seeks to offer teachers and students the opportunities to work together beyond their classrooms to develop initiative educational approaches, methods and materials to tackle the challenges of the TST and modern forms of slavery, as well as to reinforce/promote the ESD educational response in their ASPnet schools in particular and schools in The Gambia in general. The general objectives of the project could be summarised as one that is posed to empower present and future students with new and innovative resource materials and participation in academic and cultural activities that would facilitate the sustainability of intercultural dialogue and research.

It also aimed at sensitising inhabitants of the villages on sustainable development with regard to the environment, he added. As a home to twenty-two ASPnet schools, The Gambia, he said, could be used as a vehicle to combat all forms of discrimination and contemporary forms of enslavement in the country.

“Series of planned activities under the UNESCO SANDWATCH project will eventually contribute to the educational component of the United Nations decade for ESD (2005 - 2014). The activities are envisaged to equip students with the necessary research skills to transform themselves and society, thus promoting critical thinking in the educational process,” he revealed.

Demba Jawo, on behalf of the Director of Regional Education Directorate in Mansakonko, said Associated Schools commit to promoting the ideals of UNESCO by conducting pilot projects in favour of better preparing children and young people to meet effectively the challenges of an increasingly complex and interdependent world. “The new ASPnet Strategy and Plan of Action places emphasis on reinforcing the four pillars of Learning for the 21stCentury (learning to know, to do, to be and to live together) and promoting quality education as outlined in the Dakar Framework of Action,” Mr Jawo added.

He said ASPnet teachers and students have many opportunities to work together beyond their classrooms to develop innovative educational approaches, methods and materials from local to global levels.

He expressed hope that the training would serve as a stimulant for the participants to increase public environmental awareness and promote effective public participation and community involvement in environmental management processes within and outside their schools.

Hence schools and their communities are inter-related, as there is a great need for the schools to plough back to their respective communities the sustainable knowledge they learnt on environmental protection so the communities too could practice them, he said.