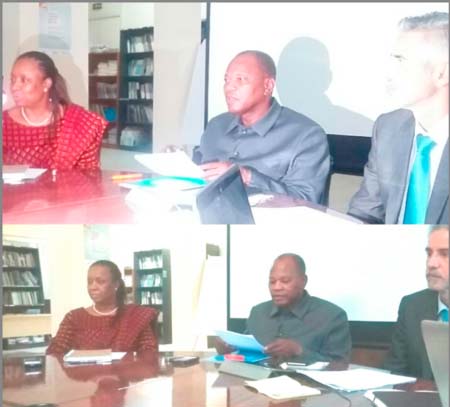 The special representative of the UN Secretary General for West Africa and the Sahel, Mohamed Ibn Chambas, has called for a transparent and peaceful presidential election in The Gambia, come December 1.

He made this call at a press conference held yesterday at the UN library, UN House, in Bakau Cape Point.

Mr Chambas is currently in The Gambia on a two-day consultative meeting, in the context of the ongoing electoral process in The Gambia, with senior government officials, development partners, NGOs, as well as representatives and leaders of political parties.

‘’The UN is appealing for the holding of a transparent presidential election, and I would like to stress the importance of a level playing field as a key precondition,” he said.

He also reminded the government of its obligations stemming from the ECOWAS protocol on democracy and good governance, as well as the AU African Charter on Democracy, Elections and Governance.

Mr Chambas stressed the primordial role of a strong, independent and professional electoral commission, and heaped praises on the IEC Chairman’s commitment to uphold electoral integrity and the principles of electoral democracy, ethical conduct, accuracy and transparency.

He said he was pleased with the outcome of his various interactions with the members of the inter-party-committee, civil society representatives, as well as members of the diplomatic community during his previous visits, which provided an opportunity to discuss issues.

He also said concrete steps should be taken to contribute to creating the conditions for the successful conduct of a credible and peaceful presidential election.

Chambas added that civil society organisations have an important oversight role to play in each society and, especially so, during the electoral period.

‘’I would like to call on Gambian civil society organisations, religious and traditional leaders, women and youth organisations, as well as other stakeholders, to stay actively involved and to contribute to safeguard the principles of an open, transparent and peaceful electoral process.’’

He also urged and reminded members of the security forces of their duty to provide security for the electoral process, including the protection of all candidates and voters, and to also avoid public display of loyalty to any political party.

He urged the police and other security services to “discharge their noble responsibilities in a diligent, impartial, professional and strictly apolitical manner.’’

He called on political parties and the presidential candidates to defend not only the interest of their own party and supporters, but also to safeguard the unity of the whole nation.

“I urge all political parties to make use of the existing mechanisms, like the inter-party committee, to engage in meaningful dialogue as a means to resolve disputes peacefully and in the spirit of cooperation.

“We observed a pre-election atmosphere more conducive to the functioning of the political parties,” he said, adding: “It is against this background that I reiterate the calls by UN and other partners on the government to conduct an independent investigation into the deaths in custody of Ebrima Solo Krummah and Solo Sandeng.’’

The UN SG’s envoy for West Africa further stated: “I entreat the government to release the thirty protestors involved in the April demonstrations, as well as the fourteen others who are in pre-trial detention following the May demonstration.

“It is also my expectation that in the post-electoral period, the government would conduct a review of existing legislation pertaining to the exercise of the right to assembly and peaceful demonstration.”

Dr Ibn Chambas commended the Gambian people for their strong attachment to democracy manifested by the animated campaigns of the various political parties, and called on them to collectively work towards a successful election.

“While I renew the commitment of the United Nations to accompany the people of The Gambia throughout the elections of 2016 and beyond, I also call on all Gambians to commit, individually and collectively, to working towards a successful 2016 presidential election.”