Speaking for the first time following his election as the UDP National Propaganda Secretary, at the last party congress held in Jarra Soma, Momodou Lamin Shyngle Nyassi has called on all Gambians, to come together and rally behind the UDP to effect a change of system in the country.

Shyngle Nyassi was speaking at a press conference held at the UDP Bureau in on Monday.

"The needs change and, with the way things are going, every Gambian is yearning for change. And I feel that the only party that can effect change is the United Democratic Party, because we have support all over the country."

"We have sold our agenda to the people since the inception of the UDP. And Gambians have trusted us, and since then we have the largest followers, as far as the opposition are concerned."

"So, I am appealing to every Gambian under this circumstance to come together and rally behind UDP to effect the change of the system," he said.

"The yesterday and The Gambia today is quite different, if you look at how things are going in the country. Our business sector is on the verge of collapsing. Our farming is also degrading gradually, which is the economic backbone of this country," he said.

"How many tonnes of groundnut did they purchase this year, compared to the previous years in the country? Gambian farmers need to come together and effect a change of the system, if they want to improve their farming. And it is only farming that can take us forward."

"This is our country, it belongs to us. So, let the foreigners especially stay out of our politics," he declared.

"Two weeks ago, we have seen Guineans queuing here to vote for their choice of candidate. There was no Gambian who has ever interfered in that election." "Every Gambian, at the age of 18 and above, is entitled to be registered. And we will make sure that we put all kinds of pressure on the IEC to comply with that," he stated.

While admitting that some infrastructure developments have taken place, Nyassi said in terms of human development things are going backwards. Putting up structures is fine, but to sustain it is another thing, he added.

"That is why the Gambians really need change, and we will effect change, based on the principles of democracy and the rule of law," he declared.

The UDP Propaganda Secretary finally called on politicians to desist from character assassination in our politics, noting that The as a country is too decent for that to be happening now. 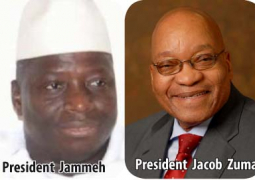