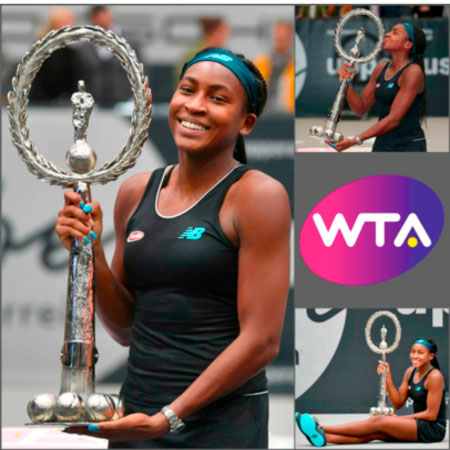 American teenage sensation Coco Gauff has earned inclusion for the World Sports Awards, 2020. The 15-year-old teenager is nominated for the Breakthrough of the year award along with two-time grand slam winner Naomi Osaka of Japan, and Canadian teenager Bianca Andreescu who won the US Open tennis tournament last year.

The three youngsters were nominated by the World’s Sports Media who casted their votes to set the stage for the landmark 20th anniversary of the Laureus World Sports Awards. The winner will be announced at the award ceremony slated for February 17, in Berlin.

Gauff, the youngest nominee for the prestigious award is one of the game’s most popular names in recent times. She rose to prominence with a magical Wimbledon run. She defeated veteran Serena Williams in the first round of the all England club on her way to making it to the quarterfinals at Wimbledon. Gauff became the youngest player to rank in the top 100th by the Women’s Tennis Association (WTA).

The girl from Delray Beach Florida captivated the tennis world once again with an extraordinary Linz performance as she won her first career singles title during the 2019 Linz Open final with a victory over strong contender Jalena Ostapenko - making her the youngest singles title winner on the WTA tour since 2004. Gauff twice teamed-up with compatriot Caty McNally and won two WTA doubles titles at the Citi Open and at Luxembourg last year.

Inspired by the Williams sisters Serena and Venus, Gauff has had early success as a teenager, winning the junior Grand Slam singles title at the 2018 French Open.

She defeated Caty McNally in the final to add on to her junior Grand Slam doubles title at the 2018 US open, pairing with McNally to win the doubles once again. Her instant success in courts comes hot on the heels of her debut WTA match back in March 2019 as she won her opening match at the Citi Open.

She was rewarded with her remarkable performances and subsequently received a wildcard entry into the qualifying draw at Wimbledon. She became the youngest player to qualify for the main draw in the professional era. And each of her matches at Wimbledon produced the largest tickets sales and the most-watched match of the entire tournament. Coco, hugely praised for her humility, composure, calmness and never-say-die-attitude continued to captivate the tennis world when she reached the third-round at the US Open which was also her first major Grand Slam tournament on home soil.

Coco was born on March 13, 2004, to a parents of humble background in Delray Beach Florida. Her parents Candi Odom and Corey Gauff are credited for their role in raising a phenomenally talented teenager on and off the courts. At just 15, Coco has already made a lasting impact in the world of tennis with memories of Wimbledon, US and Linz Open continuing to linger in the hearts and minds of the tennis world, attracting over two million followers across social media. Her rapid rise to stardom has been the best tennis story in recent history.