Lamin [Elas] Sambou, the Assistant Coach of the two times African champions has reiterated the need to put their houses in order, barely two months before the start of the FIFA U-17 World Cup, scheduled to take place in the Federal Republic of Nigeria on October 24th 2009.

We are still preparing intensively ahead of the World Cup in Nigeria, with high hopes despite the absence of some of the star players who are said to have left the country to sign their contracts in Europe, namely Lamin Samateh, alias Bassmen, Saihou Gassama, while striker Ebrima Bojang is currently in Dakar, Senegal where he joined St Etienne's Feeder Club in Dakar after the lanky forward signed a 4-year-contract with the French Lique 1 side recently.

Coach Tarik Siagy and his technical team came up with another option which saw them invited quite a large number of youngsters from different football academies in the country in order to know their standard before getting them to the World Cup.

Lamin Sambou who was part of the epoch-making U-17 team that were recently crowned the African champions, said the reason being that, is to see how best we can select the best out of them so that they can continue training with us and if possible include some of them in the World Cup squad.

Elas as he is fondly called was speaking to our reporter in this interview at the Independence Stadium during the U-17's friendly game against Luniburg on Tuesday as they beat the Youngsters of Bakau New Town by 3-goals to 0ne with Ousman Njie scoring from a superb long range short for Luniburg's consolation.

Luniburg is using this friendly to prepare themselves much better for the ongoing Bakau Nawettan which enters in its second week of mouth-watering encounters. 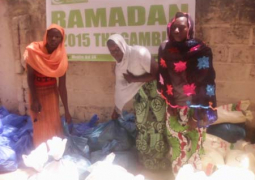