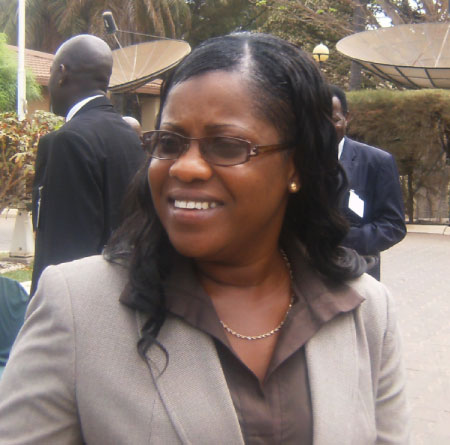 The Minister of Tourism and Culture Hon. Fatou Mass Jobe-Njie, accompanied by senior officials of her ministry and the Gambia Tourism Board, has begun a three-day pre-season tour of tourism facilities.

The purpose of the visit is for the tourism minister to have firsthand knowledge on the level of preparation ahead of the winter 2011 to 2012 tourist season.

The first port of call for the minister and her delegation was the Kombo Beach Hotel.

In his welcoming address, Van Maldegem, the new general manager of the Kombo Beach Hotel, thanked the minister and her delegation for making an official visit to them, to see the facilities of the hotel and to know their problems.

He said the minister’s visit is very important because she would know the areas the hotel is improving and areas they might need to adjust.

He added that the hotel is improving in terms of facilities like delivery of quality services to the guests.

For her part, the Minister of Tourism and Culture thanked the general manager and his entire staff for the warm welcome.

She added that a hotel should not only be classified on its beauty but most importantly on its good service delivery.

Service delivery is the key issue that the hotel should consider, the minister said, while assuring the Kombo Beach GM that her office “is always ready” to offer them support at all times.

Other speakers on the occasion included the acting-director of Tourism, Madam Fatou Biyaya, who also expressed similar sentiments.

The minister and delegation were later taken on a conducted tour of different facilities in the hotel.

From the Komba Beach Hotel, the minister and delegation headed to Lugis Complex, Djeliba Hotel, Jerma Beach Hotel and finally to the Senegambia Beach Hotel.

The minister expressed happiness over the quality of facilities that the hotels have but called on all the hotels to improve more on service delivery.

“What I saw this morning I am so much impressed,” said the tourism minister.

She called on the managements of hotels visited to continue training their staffs and workers including tourist guards, and provide them with uniforms.

According to the minister, the Ministry of Tourism is working with the Ministry of Justice, the military and the rest of the security unit to have guard posts at various hotel areas. “We have a lot of attractions within the hotel areas, so I am very much impressed,” she added.

For his part, Buna Njie, general manager of the Senegambia Beach Hotel, thanked the minister and her delegation for the visit.

Mr Njie lamented that they spend so much money on training people and when those people are trained they move to other places, which is one of the serious problems facing them.

The Senegambia Beach Hotel boss explained that they have 89 permanent staff. “We have to create an atmosphere whereby we can train the young ones who are coming up,” he added.