The move by the Social Security and Housing Finance Corporation (SSHFC) to have a relook of the welfare of pensioners in the country is indeed timely.

According to the Corporation’s Managing Director Edward Graham, the corporation has increased pension payment for its pensioners.

The increase, he said, serves as a cushion against inflation/depreciation of the currency and is in accordance with actuarial valuation.

Graham told journalists at a briefing on Monday that since its inception, the pension fund has awarded increases every three years without fail and this time around the minimum pension has raised to D910 from D700 respectively, an increase of 30%, to enhance the purchasing power of pensioners.

The move could not have come at a better time than now, considering the situation facing so many pensioners in this country.

Undoubtedly, money is having less and less value these days, given inflation and the escalating prices of commodities, particularly basic commodities like oil, rice, sugar, potatoes and meat.

But where does this leave the pensioner, the retired public servant and their family?

While the market requires, on average, D200 per day per family (D6, 000 per month), the pensioner receives only 20%-25% of that outlay. But, the pensioner like everyone else has a presumed obligation to feed his or her family.

For this they cannot depend on alms or on others, especially if they have been a major post holder in government in the past. The pensioner cannot go around begging as many still expect the pensioner to be giving. Yet, begging is what many pensioners are almost driven to.

If they are fortunate enough to own a compound then there are compound rates to settle. There are also NAWEC bills to pay. These costs must be added to the spiraling price of rice and other commodities. How should the pensioner cope with all this?

If full-time workers can hardly make their earnings stretch to the end of the month, then how far will a pensioner stretch?

In short, there is a lot of suffering among the ranks of the retired men and women who dedicated their lives to the service of the country and this suffering is being borne silently, in quiet dignity and resignation. For pensioners there is little or no hope for a better life until the earth receives them.

The government should not be apathetic to their suffering. Government should weigh the situation and show pity and it is in line with this that we would like to commend the SSHFC for coming up with such a move and urge them to do more.

In neighbouring countries, governments give retirement packages that are quite handsome. One can acquire a good gratuity plus a good home for the family. On top of this one receives a reasonable pension on which to survive and continue taking care of the family.

The Government of The Gambia should emulate this.

“He who suffers much knows much” 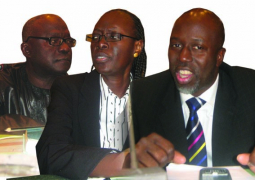