The 39th Jalsa Salana of The Gambia started on Friday 10th April and ended successfully on Sunday 12th April 2015. The Jalsa was held at Masroor Senior Secondary School, Old Yundum.

The proceedings of the programme started with congregational Friday prayers followed by flag hoisting by the special guest from UK Bro. Ibrahim Ikhlaf Sahib and the Amir Sahib of The Gambia, Bro. Baba F. Trawally.

In opening the Annual Convention, Bro. Ibrahim Ikhlaf Sahib spoke on the advent of the Promised Messiah and Imam Mahdias whose coming was foretold by the Holy Prophet Muhammad Mustaphasaw. He also mentioned the love and respect the Promised Messiah and Imam Mahdias had for the Holy Prophet Muhammadsaw and the Arabs. He also stressed on the Quranic teaching that another community of believers would be raised, as if the Holy Prophet Muhammadsaw would be raised again among the non-Arabs of Persian descent. This prophecy of Suratul Jumuah of the Holy Quran was fulfilled in the person of Hadhrat Mirza Ghulam Ahmadas who was a Persian by origin. He also drew a similarity between the prophesied community and the Gambian people who are also fulfilments of the prophecy of the Holy Quran. He said that he saw devoted followers of the Promised Messiah and Imam Mahdias among the Gambians who are also non-Arabs, as a fulfilment of the prophecy. He quoted various verses of the Holy Quran and Ahadith in their original Arabic texts in support of his arguments. Bro. Ibrahim Sahib continued by mentioning the works of the Ahmadiyya Muslim Jamaat and specifically the Promised Messiah and Imam Mahdi’sas writings in different languages especially in the Arabic language which still has no match, even in the Arab world. He also drew the attention of the crowd to various ways people all over the world, including the Arab world are accepting Ahmadiyyat through Divine guidance.

Bro. Ibrahim Ikhlaf Sahib, the special guest delivered a speech in the Lajna section (Women Wing of the Jama’at) where he elaborated on the sacrifices and devotion of the ladies of the Ahmadiyya Muslim Jamaat The Gambia. He commended them well for their good works and their love and spiritual closeness to the Khalifa, even though they are physically far from him.

In comparison to the wrong notion held in the west, that Muslim women are degraded, Bro. Ibrahim Sahib highlighted that in fact it is Islam that gives women their due rights and freedom, and supports them in every matter. He also said that Islam raises women to such a status that it even puts paradise under the feet of the mothers.

In the closing session of the 39th Jalsa Salana of The Gambia, Bro. Ibrahim Sahib drew a similitude between the Mosaic dispensation and the Muhammadan dispensation, both being law-bearing prophets. He also quoted different verses of the Holy Quran which show that the Muhammadan dispensation would be blessed with the Institution of Khilafat in the same way the Mosaic dispensation was blessed with many Khalifas. He shared the Quranic injunction that believers should obey Allah Almighty, His prophet and the people in authority, and that Ahmadis are foremost in being loyal citizens of their countries. He advised the attendants to be always faithful to their country and those in authority regardless of faith or creed, even if they have to give their lives.

Giving his remarks in the opening session, the Amir Baba F. Trawally spoke at length about the significance of the Jalsa Salana which started in 1891 by the Promised Messiah and Imam Mahdias himself with a total attendance of 75 people, but even in our small Country, The Gambia thousands of people gather yearly in the blessed occasion of Jalsa he commented. The Amir mentioned that the purpose of the Jalsa Salana is to give spiritual and moral training and to establish brotherhood among the participants. He also mentioned that the Holy Prophet Muhammadsaw is a spiritual guide for the entire humanity and his beautiful teaching was pure and very peaceful and went on to emphasise that Islam is a peaceful religion and therefore Muslims must be embodiments of peace and tranquillity for the entire human race. If the world realizes and follows the beautiful teachings of the Holy Prophet Muhammadsaw, the chaos and destruction which the world is facing today would become history said Amir Baba F. Trawally. In admonishing the Ahmadis, the Amir advised them to remember their obligations and services to the society because the Holy Propet Muhammadsaw says that the love for one’s country is part of faith. ‘’Therefore we must work tirelessly to develop our peaceful country and at local, regional and national levels, we must work with the authorities, community leaders and everybody to contribute our quota to national development,’’ he continued. In conclusion he requested special prayers from the participants for His Holiness the Worldwide Spiritual and Supreme Head of the Ahmadiyya Muslim Jamaat Hadhrat Mirza Masroor Ahmadatba , the country The Gambia and humanity at large.

In the Ladies (Lajna) section, Amir Sahib Baba F. Trawally reminded women of their responsibilities for they are the foundation for the training and education of the children. A well trained and educated society means a prosperous and peaceful society. He also reminded them about the purpose of the advent of the Promised Messiah and Imam Mahdias and the role Lajna can play in support of this blessed mission.

He advised women to continue with their hard work and requested them to pray for His Holiness Hadhrat Khalifatul Masih Vatba, the troubled regions and countries around the world, for our dear and beloved country The Gambia as a nation and Muslims and non-Muslims.

Several dignitaries also spoke about their impressions of the services Ahmadiyya Muslim Jamaat is offering in The Gambia. Among them was the Governor of Lower River Region Honourable Salifu Pouye who acknowledged the contributions the Ahmadiyya Muslim Jamaat is making in The Gambia in educational, health and religious fields. He also expressed his delight for attending this year’s Jalsa and he advised that it is the duty of everybody involved in establishing peace and development of the country.

The Paramount Chief of The Gambia Mr. Alhaji Demba Sanyang also made a remark about the Jalsa Salana and said a few words expressing his emotions and experiences with the Ahmadiyya Muslim Jamaat. He expressed his gratitude to Amir Sahib for the regular touring of the country and visiting and sharing words of wisdom with the local leaders and people of different communities advising them to maintain the peaceful and loving character known to Gambians in general. He extended the greetings of the President of The Gambia and said that the Ahmadis in The Gambia are supporting the vision of the President for a peaceful and tolerant society. He also requested special prayers for The Gambia and her people.

The topic ‘Islam is a Religion of Peace: A Muslim is a Peace Maker’ was deliberated on by Bro. Tahir Ahmad Touray. He said that Islam stands for peace and its role is the establishment of tolerance, mutual love, respect, security and prosperity. He said that there is no room for violence in Islam. He said the early Muslims treated the inhabitants of the conquered territories with love and respect. The non-Muslim subjects of the Islamic State were allowed to practise their religion without any form of hindrance.

On his part, Ustaz Musa Bah delivered a speech on the topic ‘The Khilafat’. He said the world is passing through turbulent times and man is searching everywhere for the solution to the global disorder and chaos, but can’t find it anywhere. This is due to the lack of focused leadership which can only be provided by the blessed and pure institution of Khilafat, established on the demise of the Prophet. He said that it is Khilafat that establishes unity and unites the hearts thereby eliminating all forms of disorder. He outlined the importance and blessings of the Institution of Khilafat. He therefore said that the true Khilafat that affords peace and security is found in the Ahmadiyya Muslim Jamaat. The entire world in general and the Muslim Ummah in particular should turn towards this blessed leadership in order to enjoy peace and security.

A separate session was conducted in the Lajna Imaillah (women wing of the Jamaat). The following topics were discussed by ladies. On her part, Sist. Fatoumatta B.K. Sonko elaborated on the topic ‘Great Sacrifices of the wife of the Holy Prophet Muhammadsaw: Hadhrat Khadijara’. In the first part of her speech, she dealt with a brief sketch of the life of Hadhrat Khadijara and on the second part was on the lessons Muslim women all around the world should learn from her outstanding and exemplary character. She cited various ways she supported the mission of the Holy Prophet Muhammadsaw and how she completely devoted her life and property to the service of Islam thereby becoming a role model for Muslim women.

Speaking on the topic ‘The Characteristics of Hadhrat Sayyeda Nusrat Jehan Begumra Sahiba the wife of Hadhrat Promised Messiah & Imam Mahdias’, Sist. Tayyaba Ahsan Sahiba said that Hadhrat Nusrat Jehan Begum Sahiba was a very righteous woman who loved her husband and supported her mission passionately in every aspect and that she was a mother, mentor, a carer of orphans and guardian of the vulnerable and sick. She always relied on God and sought guidance from Him in every matter and did all household chores in support of the numerous guests of the Promised Messiah and Imam Mahdias.

A speech was also delivered by Sist. Isatou Kinteh on the topic ‘Paradise lies under the feet of your Mother’. She elaborated on the metaphorical meaning of the Hadith and clarified that it did not mean Paradise can literally be found under their feet. She explained the deep meaning of Paradise and the obedience and tender love and care that should be shown to mothers in order to attain their prayers, therefore leading to Paradise in this world and in the hereafter. She narrated a tradition of the Holy Prophet Muhammadsaw in which he forbade a companion from going to Jihad and instead ordered him to serve his mother.

Another speech delivered in the ladies’ section was ‘Training of Children’ by Sist. Majida Hamid-Adiamoh. She highlighted that all parents must save their children by giving them moral and spiritual training. She quoted the Holy Prophet Muhammadsaw who said that ‘the best gift which a father can give to his children is that of good education and manners’. She advised parents to train their children in accordance with the Islamic teachings.

The Jalsa attracted over eight thousand participants across the country and delegations from Guinea Bissau, Senegal, the sub-region and UK.

May Allah Almighty continue to bless our dear country, The Gambia and may He give us the ability and wisdom to cherish the peace and brotherhood among all of us and may He continue to guide us towards nurturing the peace we are enjoying and grant stability, security and prosperity to our beloved country, the Gambia, sub-region, Muslim Ummah and entire humanity at large. Ameen. 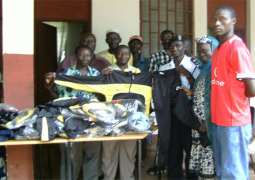 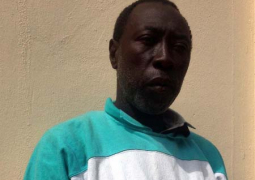 Man charged with incest and murder