The Prophet, however, consistently refrained from adopting an attitude of anger toward his enemies. Although their fanatical prejudice, their shortsightedness, their blind traditionalism, and their calumnies increased the difficulties that he was facing, they were never able to arouse his anger. Instead, he sought always to bring them to see the truth, by means of spiritual instruction. Neither pressure nor promises, neither deprivation nor difficulty, were able to shake the determination of the Prophet. Nor did the spreading of cunning and baseless accusations yield any result, for the compelling logic of the Quran and its re-echoing melody were too profound and too exalted not to leave an effect on the mind of whoever heard it; or to captivate and transform them. Even enemies were sometimes compelled to admit the truth. Tabarsi writes in his commentary on the Quran: “When Walid, the celebrated sage of the Arabs, heard the Prophet recite the verses of Surah Fussilat, he was profoundly affected. The Banu Makhzum gathered around him and he described the Quran to them as follows: ‘It has a distinctive charm and a unique beauty. Its branches are laden with fruit and roots are blessed. It is an elevated form of speech, higher than all others. Thus he spoke and went on his way, and the Quraysh thought he had embraced the religion of Muhammad, upon whom be peace.”

Although the Prophet had vast resources of patience, he was sometimes distressed by the foolish conduct of his people. He would go into a corner until Divine command summoned him back to his grave responsibilities, for to desist for a single instant in striving toward the scared goals that had been set for him was impermissible; he had to shun all rest and retreat.(See 74:1-4). One of the distinctive factors enabling the Prophets to succeed in the movements they launched was their steadfastness and power of endurance. The Quran mentions the method followed by the Prophets in their struggles as follows: “Ishmeal, Idris and Dhu ‘l-Kifl were all steadfast and patient in fulfilling their missions.” (21:98). All the envoys of God endured hardship and suffering when they were faced with denial and rejection, but they remained steadfast until the aid of God secured them their triumph.

THE BEGINNING OF MIGRATION

As a result of the oppressive atmosphere in Mecca and the unbridled persecution of the Muslims that threatened them constantly with imprisonment, torture and death, and in recognition of the fact that the Muslim warriors were not yet ready for battled, the command was given to migrate. The Prophet gave instructions that the Muslims leave the city one by one and proceed to Yathrib. The Quraysh understood well the danger represented, and they stooped to all kinds of illicit means to prevent the Companions of the Prophet from departing, even taking their wives hostage. But true to their original decision, the Muslims began gradually to leave the center of polytheism, ignorance and oppression, leaving behind their attachments and their families in order to migrate. The people of Yathrib took them into their embrace. Most of the Muslims had left, and Mecca was almost empty. This unusual situation and the disquieting news arriving from Medina greatly worried the Quraysh. Since the previous ill conduct of the leaders of unbelief and rejection had not yielded any results, they arrived at a grave and perilous decision: they planned to kill the Prophet. It was agreed that as soon as night fell, the designated assassins should go about their work. They surrounded the house of the Prophet at night, waiting in front of the door for the Prophet to emerge at dawn. They kept his room under surveillance throughout the night and were convinced that the son of Abdullah, who had not a single protector in the city, would be unable to escape their siege of his house and that his fate would be sealed at dawn. However, the Messenger of God ordered Ali, upon whom be peace, to sleep in his bed-Ali whose very spirit had been formed in Islam and who thought nothing of dying for the sake of God and the life of the Prophet. The Prophet then left the house secretly, in the company of Abu Bakr.

At this point a man chanced by the house and asked those who were thirsting for the blood of the Messenger of God whom they were waiting for. When they replied, “Muhammad,” he told them, “he has escaped your grasp.” When dawn rended the breast of the horizons, they were astonished to see Ali, upon whom be peace, rise up from the bed of the Prophet. It is not quite clear how the Prophet managed to break through the circle that had been thrown round his house without arousing attention. What is certain is that God had willed to deliver His Chosen Messenger from the grasp of those vile and lowly persons. The Prophet left Mecca in the heart of the night and took refuge in a cave, and then continued on to Medina using back roads. Once he reached the city, it was clear that the treacherous plan of the Quraysh had ultimately harmed them and benefited Islam and the Muslims. The powerful hand that had protected the burning torch of Islam for thirteen years against all harm was able with ease to bring this conspiracy to nought.

Before the migration of the Prophet, a number of citizens of Medina had come to Mecca to seek the support of the Quraysh in the tribal wars that for years had pitted the Aws against the Khazraj. Despite the warnings of the Quraysh, they had listened to the words of the Prophet, upon whom be peace, and had been deeply affected, even transformed by them. The next time that they came to Mecca in order to perform the pilgrimage; they had formally accepted the summons of the Messenger of God and embraced Islam. After leaving Mecca and returning to their native city, they expended great efforts to enlighten the people of Yathrib and convey the Divine message to all classes of the population. This represented in itself a massive blow to the foundations of idolatry. The people of Medina were exhausted by the long tribal wars, and they saw in the call of the Messenger a message of hope and a means of deliverances from the consuming fire of civil strife. In order to appreciate the need of society at that time for the great movement of Islam and to grasp the role played by Islam in putting an end to corruption and misguidance, we must understand the situation prevailing in the Arabian Peninsula.

Ali, upon whom be peace, said: “God sent Muhammad, upon whom be peace and blessings, to warn people away from the path in which they were engaged, and He appointed him trustee of His heavenly decrees. At that time, O Arabs, you aware following the worst of beliefs and customs, and you lived in the most deprived of all lands. You slept in the midst of rough stones and poisonous snakes, drank foul water, ate no proper food, split each other’s blood, and disregarded the ties of kinship. There were idols among you and sin had rendered you impotent.” The migration of the Most Noble Messenger to Medina, which marked the beginning of the Islamic era, was the start of a new chapter in the history of Islam. Thereafter blows rained down continuously on the forces of corruption and falsehood. The Prophet’s cause took root in Medina. His call went from house to house, and a new society crystallized. The powerful logic and creativity of the ideas set forth by Muhammad, upon whom be peace and blessings, were such that the previous cultural, moral and social structures of the people of Medina thoroughly collapsed, together with all the customs that dominated their lives. The chains of slavery and the fetters of cruelty and oppression were torn asunder; the powerful were pulled down from their thrones of arrogance. The immortal shari’a brought by the Prophet to mankind as a gift of new justice and elevated culture, and Medina became swiftly transformed into a religious, social and military base for the Islamic cause.

China-Gambia ties: some shining light on the horizon 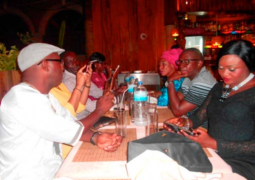