Taiwan wants to play the role of a peace-maker, says Ambassador Chen

The ambassador of the Republic of China on Taiwan has said that Taiwan wants to play the role of a peace-maker in Asia.

Ambassador Chen made the remarks on Friday in an exclusive interview with this reporter at his office in Bakau, a few days before 101st National Day of Taiwan.

The Taiwanese diplomat was responding to a question concerning the disputed Diaoyutai Islands which Taiwan, Japan and Mainland China are all claiming ownership of.

According to the Taiwanese ambassador, President Ma Ying-Jeou of Taiwan has proposed what he called the ‘East China Sea Peace Initiative’, which is based on the principle of “safeguarding sovereignty, shelving disputes, pursuing peace and reciprocity, and promoting joint exploration and development.”

The chief Taiwanese diplomat told The Point that part of President Ma’s peace initiative was a call for respect for international law, and dealing with disputes through peaceful means; to seek consensus and draft an East China Sea Code of Conduct; and to establish a mechanism for cooperation on exploration and developing resources in the East China Sea.

“In its role as a facilitator of peace in the international community, the government of the Republic of China (Taiwan) has proposed the East China Sea Peace Initiative and its implementation guidelines, in the sincere hope that all parties concerned replace confrontation with negotiation, and set aside their controversies by means of temporary measures, so as to maintained peace and stability in the region,” he added.

“The Treaty of Shimonoseki signed after the war stipulated in Article 2, Paragraph 2 that the islands of Formosa, together with all islands appertaining or belonging to it, had to be ceded to Japan. The Diaoyutai Islands were related to Formosa, and therefore the islands were ceded to Japan along with Formosa in accordance with the treaty.

In 1941, the Republic of China declared a war against Japan one day after the attack on Pearl Harbour, and revoked all of its treaties, agreements, and contacts with Japan.

The diplomat said that even by looking at the location of the island on the map, the disputed Island is closer to Taiwan.

“It’s a traditional fishing area for Taiwanese sailors, but we hope that the issue can be settled down quickly through peaceful means,” remarked ambassador Chen.

He added: “We don’t want to see any conflict or fighting in this area.”

On recent US Visa waiver for Taiwan
Commenting on last week’s announcement by the US department of Homeland Security of Taiwan’s membership in its Visa Waiver Program, ambassador Chen said it is very good for the country.

“We made a lot of efforts to have this, and it brings the number of countries and territories that have offered such privilege to Taiwan to 129,” he said.

According to him, it demonstrates that Taiwan’s citizens are law-abiding and socially progressive, as confirmed by the American government’s decision.

“Taiwanese overseas always have respect for the laws of foreign lands,” he added.

Ambassador Chen further stated that the development is very significant for Taiwan, and is also unique.

“What makes it unique is that Taiwan is the first country without diplomat relations with the US to have such a special privilege,” he said.

Taiwan-Gambia Relations
Commenting on the ties between The Gambia and Taiwan, Ambassador Chen said the relationship is very much cordial.

He said apart from the longstanding partnership in areas of health, education, infrastructure and agriculture they also promote cooperation in fields such as culture and military support.

He said the ties binding the two countries are here to stay, since they are based on mutual respect and understanding.

Gambian students in Taiwan
He said there are over 200 Gambians studying in Taiwan in various universities, and the number is expected to increase.

Chen said they are impressed with their performance, and that the students were equally praised by President Jammeh during his visit to Taipei in May this year.

Boats donated to The Gambia
Responding to the fleet of patrol boats donated to the Gambia in 2009 by Taiwan, Ambassador Chen acknowledged that one of the boats is not functional.

However, he stated that regular maintenance is very essential for the sustainability of the boats, adding that they also offer training to officers manning the boats to that effect. 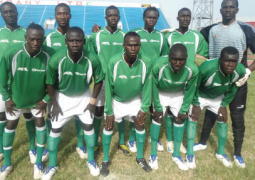