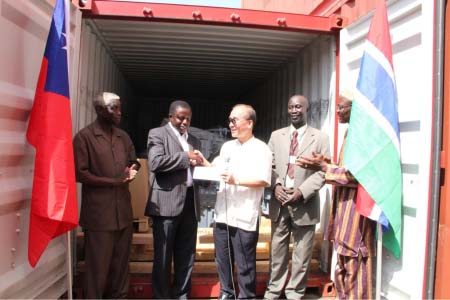 Four (4) new MAN engines as well as the propulsion and steering systems from Schottel in Germany were on Wednesday, 6 November 2013 handed over by the Ambassador, H. E. Samuel Chen on behalf of the Republic of China (Taiwan) to officials of the Gambia Ports Authority (GPA) for the Kanilai Ferry, which is one of the ferries that ply the Banjul-Barra crossing point.

It is aimed at enhancing the capacity of GPA to be able to deliver safe, efficient and a more reliable ferry service for the continued socio-economic development of The Gambia.

In his remarks, the Ambassador H.E. Samuel Chen reiterated that evidently transportation plays a major role in the socio-economic development of any country hence the importance of the project.

“My government is delighted to be able to collaborate and partner with the Government of The Gambia on development issues and it is my wish that our existing cordial bilateral relationship will continue to flourish,” he said.

He recalled that 4 new caterpillar engines as well as propulsion and steering systems were earlier received from the same company for the Johe Ferry and that this grant project includes all the four ferries.

He then presented a cheque for USD728,153.92 which, according to the contract, is the 2nd payment (40%) with the other 10% expected to be paid after the arrival of all the engines and their subsequent installations.

The acting-managing director of GPA expressed his sincere appreciation and gratitude to both the Republic of China (Taiwan) and the Government of The Gambia in the interest and tireless efforts at improving the technical efficiency of the ferries.

He noted that the Banjul-Barra crossing point is very essential to the transportation of people and goods alike.

He assured them that the engines will go a long way in enhancing the capacity of the GPA to be able to deliver safe, efficient and reliable ferry services for the continued socio-economic development of the country.