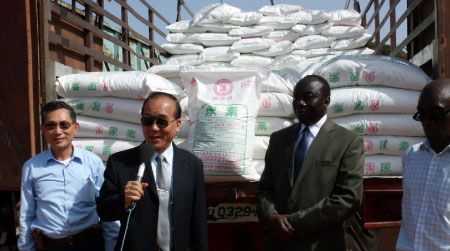 The government of the republic of China on Taiwan through its embassy in Banjul yesterday presented 1,360 metric tonnes of fertilizer to The Gambia.

Taiwanese ambassador to The Gambia Samuel Chen presented the fertilizer to the minister of Agriculture at a ceremony held at the GGC Depot along the Banjul-Serrekunda highway.

Speaking on the occasion, Ambassador Chen said the fertilizer is important for rice cultivation, and expressed hope that the intervention would boost rice production in the country.

“We know that last year there was a food shortage, and we were very much concerned about it,” he said.

According to him, the fertilizer is being supplied in two consignments, and the first one which arrived three days ago included 690 metric tonnes (compound 460 and urea 230) loaded in 35 containers.

“The second batch including 670 metric tones, and packed in 24 containers, will arrive in ten days’ time,” he announced.

The total cost of the fertilizer is over one million US dollars, said Ambassador Chen.

“Actually, its cost US$1,036.67.00 and our technical mission team will start the distribution right away to farmers in villages,” he added.

Chen used the opportunity to inform the Agriculture minister that finalisation on another fertiliser project is at an advanced stage and, hopefully, would also work well.

Solomon Owens minister of Agriculture thanked the government and people of Taiwan for the gesture.

“It gives me great pleasure to accept this consignment of fertilizer on behalf of President Jammeh, the government and rice farmers,” he said.

According to him, fertilizer is very significant for agricultural development, and hailed Taiwan for bringing what he called a unique fertilizer to the country.

He added that the donation was very timely, further noting that the timely availability of farm inputs such as quality fertilizer is essential for high yields.

The minister also called on the beneficiaries to ensure that the fertilizer does not go beyond the borders of the country.

“We say a big thank you to your government through you honorable Ambassador for this great gesture, and other interventions that you are making to our national development,” Minister Owens said.

This paper has learnt that the fertilizer would be distributed to rice farmers in six agricultural regions in the country such as URR, CRR south, CRR north, LRR, NBR and WCR.