Magistrate Ebrima Jaiteh of the Brikama Magistrates’ Court Tuesday convicted and sentenced one Yaya Camara to one year in prison for escaping from lawful custody.

According to the facts as narrated by the police prosecutor, Sgt O. Touray, it happened on 7 July 2015 at the Brikama Magistrates’ Court.

He said the accused person was brought to court on charges of shop-breaking and stealing and was under the custody of the police.

Police prosecutor Touray further narrated that the accused person managed to go around and jumped over the court premise’s fence and ran away with the police handcuff.

He went to DurumaKolong in Brikama and hid himself there, then went with one Bulli to the forest in Brikama, who helped him to cut the police handcuff.

The police searched for the accused person until he was apprehended by one Lamin Boye, who took him to the Suba Police Post and later to the Brikama Police Station.

The accused accepted the facts as narrated and was convicted and sentenced accordingly, after he begged the court to temper justice with mercy, as it was “a mistake”. 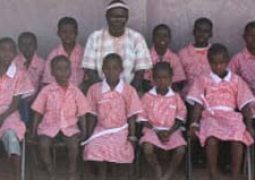 BIBLICAL REFLECTIONS: TO THE CHURCHES WRITE....

Convention on the Rights of the Child turns 21