Global Unification, in collaboration with Africa Stop Malaria, a charitable organization in , yesterday commenced a five-day malaria campaign geared towards combating malaria in The Gambia. The campaign, known as STOP MALARIA ROUND II, is a follow up to the one held in The Gambia in August 2008 at , Kombo South. Like the previous one, the Stop Malaria round II, slated from 2ndto 6thDecember 2008, will include activities such as in-house training for GU volunteers on Malaria prevention, distribution free of Charge of insecticide treated bed nets to a number of communities and the donation of anti malaria drugs to selected hospitals and health centers in The Gambia.

In preparation for the campaign, GU Volunteers recently converged at the Association's new secretariat, located at , Serrekunda, to discuss and share ideas about how best to make the program successful. During the deliberation, the Stop Malaria Campaign co-ordinator in The Gambia, Ms. Fatoumatta Bah, deliberated on the activities marking the campaign period. She also informed the gathering that a team of five volunteers from Africa Stop Malaria will fly to to assist in the co-ordination and implementation of the campaign. She described the team as highly dedicated philanthropists who are volunteering their time, energy and resources to contribute in our continuing national efforts to fight against Malaria. She described the campaign as a national duty because it helps to ensure a healthy population, which she said, is paramount in the socio-economic development of our country.

Meanwhile, at the time of going to the press we learnt that the Spanish team has already arrived in the country.

The National Representative of Global Unification in The Gambia, Mr. Ebrima S. Dem thanked the GU volunteers for their commitment and love for the nation. He said, there their mere presence at the meeting is clear testimony that they will work hand-in-glove with the Stop Malaria Campaign team from . He also used the opportunity to call on other organisations to join hands with GU in this noble crusade. 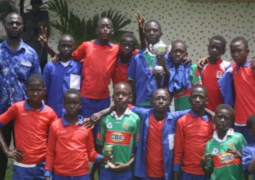