This week, Food Tank is highlighting a new fact sheet created by the Small Planet Institute that examines a reality that nearly one billion people face every day: hunger.

“World Hunger Factsheet: What We Need to Know,” their newest publication, stresses that while hunger still persists, there are innovative solutions helping the millions who are currently hungry.

In 2000, the United Nations issued the Millennium Development Goals (MDGs), which call for halving the number of chronically hungry people in the developing world between 1990 and 2015. But with the deadline for meeting the MDGs closing in, the U.N. Food and Agriculture Organization (FAO) reports that measuring progress has proved to be difficult and potentially misleading.

For example, in Vietnam chronic hunger has been reduced to eight percent, but almost one-third of Vietnamese children show stunted growth, an irreversible indicator of undernutrition. Moreover, the FAO’s definition of “chronically hungry” doesn’t measure the full scale of global hunger.

According to the FAO, those classified as “chronically hungry” must experience a severe calorie deficiency for at least a year. Consequently, individuals plagued by short-term episodes of hunger are not encompassed in recent food security reports by the U.N., the FAO, and the World Food Programme. Neither are malnourished individuals who receive adequate calories, but lack the nutrients to ensure good health. This means a lot of hungry people go uncounted.

The Small Planet Institute’s latest fact sheet and their other publications like “Framing Hunger” are helping highlight the nuances in defining, categorizing, and measuring the world’s hungry.

The Small Planet Institute also stresses that although there are too many needlessly hungry and malnourished people in the world, the problem isn’t a lack of food. According to Frances Moore Lappé, “the false diagnosis is that the problem is scarcity. It is a fear driven message that there’s not enough.”

The world produces enough food to provide 2,800 calories for every man, woman, and child each day. However roughly one-third of all food - the equivalent of one kilogram per person per day - ends up rotting in the fields or thrown away in the trash. But this news is both disheartening and uplifting. While it means that food waste needs to be severely curbed, it also means that current global food production is sufficient to feed the planet.

Immense untapped potential exists in other overlooked places, according to the Small Planet Institute, including in livestock production. Three-quarters of the world’s agricultural land is used to for livestock, yet livestock provide only 16 percent of the world’s calories. On average, livestock require six kilograms of plant protein to produce one kilogram of meat for human consumption. About 30 percent of global corn crops and 80 percent of global soybean crops are used for livestock feed. A shift away from livestock production could free up these land and food resources to help feed hungry people.

Fortunately, there are success stories that governments, individuals and organizations worldwide can strive to emulate. In Brazil, the government, civil society organizations, and farmers are working together towards zero hunger. The government’s initiatives are driven by the national constitutional right to food, and include the founding of 100 “People’s Restaurants” that provide US $.50 meals to thousands of city dwellers each day, created with food grown by local farmers.

The Landless Workers social movement has helped to resettle 370,000 Brazilian families on an estimated eight million hectares of farmland, and offers training and support in ecological agriculture. Combined with employment opportunities and a strengthened currency, these initiatives have decreased Brazil’s economic inequality and reduced the number of hungry Brazilians by 40 percent.

And other nations can emulate some of Brazil’s policies. In Frances Moore Lappé’s words, “Hunger is not the result of the scarcity of food but the scarcity of democracy.” Through changing public policies, strengthening social movements, and supporting the Right to Food, the world could see a drastic reduction in hunger.

By targeting food waste and untapped resources, more food will become available to those who need it, without the need to increase production. Business leaders, policy-makers, eaters, and farmers need to see what is working—and use those models to nourish both people and the planet.

“I have seen firsthand that agricultural science has enormous potential to increase the yields of small farmers and lift them out of hunger and poverty”. 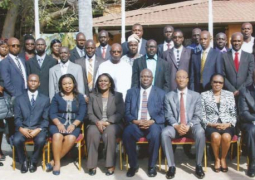