Statement by PDOIS on Gambians and the Riots in UK

A number of Gambians in the UK did call us to explain their situation while the riots unfolded. The whole scene was surreal, one of them commented after witnessing young people rampaged London for days, setting vehicles, buildings and garbage dumps alight while breaking into stores and showing defiance to cameras and the police.

We had expected the Government of the Gambia to issue a statement along with the British High Commission to calm relatives of Gambians in the UK many of whom could not hide their worries as they stuck to their phones counseling their love ones not to venture into the streets, in areas enveloped by riots.

Interestingly enough, we came to discover that the new British High Commissioner has not even presented his credentials to President Jammeh since the departure of Mr. Sinkinson. In this regard it is difficult to get an official position on the conditions of Gambians in the UK. However, the safety and security of Gambians in particular and that of human beings every where is our concern. This is why we have decided to issue this statement on the London riots.

It is the view of the highest authorities in the UK that the riots were not about politics and protests but about theft and criminality. “The cause of the riot is not attributed to poverty but to a culture that glorifies violence, shows disrespect to authority, and says everything about rights but nothing about responsibilities.” The rioters are conceived as a lawless minority who ought to be tracked down, charged and given custodial sentences.

It is important to put the riots in the UK into proper perspective and indicate their international significance. These questions now arise: How did the riots emerge? Are they the handiwork of lawless gangsters? Are they about politics and protest? What are the international ramifications? What is the way forward?

The riots sprang from the shooting of Mark Duggan a 29 year old man by the police in Tottenham. This was followed by a peaceful demonstration calling for thorough investigation into the death. This was later followed by the looting and burning of shops and open defiance of the police.

In societies where there is Centralized power which provides no room for freedom of expression, freedom to demonstrate peaceably, freedom to change leaders by peaceful means, the restlessness of the middleclass takes the form of defiance of Centralised authority and a call for its overthrow. This is what happened at Tiananmen Square, Egypt, Tunisia, Bahrain, Yemen, Syria and now Libya.

Furthermore, where there is deficit in prosperity and social Justice the middleclass becomes the first to be restless. In societies where the political and civil space exists for peaceful protests and peaceful change of political leadership one would expect demonstrations against acts of injustice, unfavorable policies and abuse of authority.

This is what is happening in Israel today, Spain etc. These demonstrations could become riotus like it did in Greece if peaceful protests do not lead to economic remedies. It only takes one spark to bring about an unexpected conflagration.

What then is a proper way of contextualizing the riots in the UK? The answer is simple. Throughout the riots no person spoke about overthrowing the British government. Two issues became evident in all the interviews of rioters by the media, their defiance of the police and hostility to profit making institutions. This is a manifestation of alienation.

Hence it is very clear that the shooting of Mark Duggan was just a spark that lit the fire. Once it happened, all the young people who are alienated from mainstream society found ways of venting their anger by going on the rampage. The end result is massive destruction of property that no single individual would eventually be proud to claim to have perpetrated. This is the ultimate consequences of spontaneous riots.

What then is the solution? The solution is neither to rationalise the actions nor to alienate the perpetrators all the more. What is needed is to reduce the alienation by humanising the rioters as Tariq Jahan has done, a father in Birmingham whose son was run over with a vehicle and killed as they tried to protect their communities.

This is done by establishing commissions of enquiries and truth and reconciliation commissions which temper justice with mercy. One should not speculate on the background of the rioters and their motives. One should find out the human beings behind the civic disobedience.

The political leaders in the UK should have utilised the incidet to defend the values of democracy and freedom. They could have said to the rioters that they had the right to protest against the shooting of Mark in a peaceful manner and call for redress; that they even have the right to alter the government in peaceful elections; that rights and responsibilities are irretrievably linked and each must protect the rights and properties of others to have theirs protected.

They could have analysed how goods would become more expensive and how cost of living could skyrocket as consumer shops try to recover their losses. As people realise that some actions make them to achieve the every opposite of what they intended they would learn to temper emotion with reason. Maturity is nothing but the ability to temper emotion with reason to ensure self control and self determined action. One ceases to be an imitator and engages in well throughout actions.

In the 21st Century one does not expect a language from political leaders that is reminiscent of the monarchists who established one party state and dictated to parliaments and courts to make haphazard laws and deliver haphazard justice just to keep in place artificial tranquility that is torn asunder with unparalleled rapidity and superseded by unparalleled chaos.

Finally, we have also observed that the attempt b some communities to defend their own members almost gave rise to a civil war. This confirms that an independent and impartial professional police force is the best instrument for ensuring the protection of life and property in a democratic society.

We therefore hope that the right lessons will bedrawn to enable the political leadership in the world to know that this is the era of the people. An era toutilise all means at our disposal to nurture the type of sovereign citizens who would have their civil, political, economic, social, cultural and ecological rights defended, while defending that of others. It is only then that our societies, in particular, and the world, in general, will become a universal home where liberty and prosperity will reign for eternity. 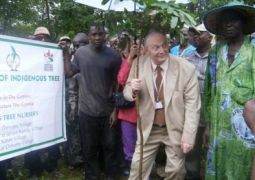