Standard Chartered, others 'walk for sight' 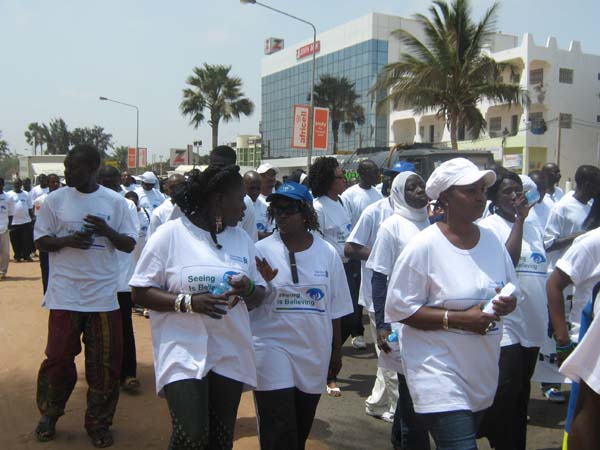 Standard Chartered Bank on Saturday May 8th 2010, in collaboration with their partner institutions held a procession from the bank's West Field Branch to the Traffic Light branch.

The march-past known as "walk for sight" was meant to raise funds to offer free cataract surgery to patients across the country.

Addressing the participants at the end of the walk, Standard Chartered Bank's Chief Executive Officer, Mr. Humphrey Mukwereza recalled that in October 2008, the bank had announced 'Seeing is Believing', a global initiative, aimed at tackling avoidable blindness.

The bank under the initiative will invest US$20million to fund the development of sustainable eye care services in less advantage areas of 20 cities across the world.

"This new phase of the programme will give poor, marginalised populations access to complete services from cataract surgery, to preventive treatment and specialised medical interventions," he said.

According to him, the employees of the bank initiated the whole idea in 2003, and it has since been helping to tackle avoidable blindness.

He said the President of the International Agency for Prevention of Blindness described the initiate as a "trail blazer corporate social responsibility."

He added that the urban focus of the programme reflects the increasing incidence of avoidable blindness in cities, as urbanization swells the numbers of people living in less advantage urban areas where access to eye care is poor and awareness around eye health is low. The Gambia, he said, is no exception to this trend.

SCB's boss further revealed that also in 2008 a fund-raising football match was held in The Gambia, during which US$12,000 was raised to fund successful cataract operations for 200 women and children. He thanked their partners and customers for their support in making the initiative a success story.

CEO Humphrey expressed optimism that by supporting institutions like Sight Savers and the Ministry of Health, "a Gambia-free of avoidable sight impairment is achievable."

The implementing partners are the Ministry of Health and Social Welfare and Sight Savers International, because of their credibility and commitment to the cause.

All of them and other partners had joined the SCB staff and management in the procession.