The Disaster Management Committee of the Kanifing Municipal Council has given a three days ultimatum to the management committee of the Tipper Garage in Bakoteh to clear all the rubbish dumped along waterways leading to the newly built Bakoteh Bridge.

This development follows a three hours visit by the committee to the ongoing road construction site from Westfield to Sukuta, in which the committee expressed its dissatisfaction in the increasing waste dumping around the project sites.

According to the committee, failure to adhere to the ultimatum would lead to legal action taken against the Tipper Garage committee.

The purpose of the visit, according to Mr. Musa Mendy, Chairman of the KMC Disaster Management Committee was meant for the committee members to see for themselves whether the ongoing road construction will not cause flood in KMC during the rainy season.

At the Tipper Garage Mr. Mendy and the team found heaps of rubbish dumped along the waterways to the newly built Bakoteh Bridge. During a meeting with the Tipper Carriage committee, the KMC disaster committee chairman strongly urged the Tipper Committee to clear all the rubbish within 72 hours from the main waterway if not legal action would be taken against them.

The Tipper Carrage committee in their response promised to remove the rubbish before today (Monday). They also gave assurance to the KMC Disaster Management Committee that no more rubbish will be dumped at the waterway site.

Mr. Baboucarr Dibba Senior Project Manager Gamworks who was also part of the team said his agency is here to help the people of the Gambia, adding that they enjoy working with KMC Disaster Management Committee. Mr. Dibba said all their drainage system has been covered, noting that they can only be block if people drop rubbish inside the drainage system.

He said before any rainy season, the drainage systems must be clean and covered, adding that Gamworks is only responsible for the implementation of the project while the maintenance of the drainage system is in the hands of the KMC and not his agency. 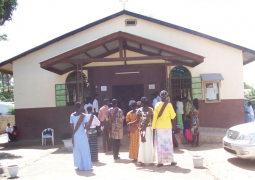