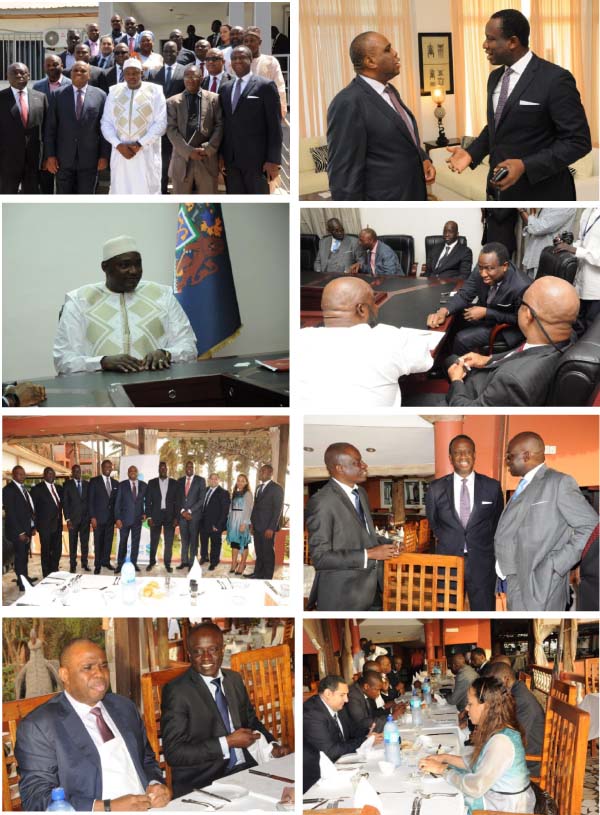 Standard Chartered Bank, CEO K.O Adenowo, President of Afrexim Bank, Benedict Oramah along with a high powered delegation of African businessmen interested in investing in the Gambia held talks with HE President Adama Barrow on Monday 15th May 2017 at his office in Fajara.

During talks with HE President Adama Barrow, Afrexim President pledged their financial support to HE President Adama Barrow and people of The Gambia.“We came to discuss how we can support Gambia in the various priority areas of the new government, given the transparency, and commitment we’ve seen in their part to the people of the Gambia. We hope that we can support the Gambia, not only through financing but also to bring in investors that can further facilitate the growth of the private sector” he said.

He  continued: “We are looking at starting initially with US$500M in the key sectors that the government has identified mainly in agriculture, tourism and other trade logistics. So we are looking at supporting the growth of tourism, helping to convert the Gambia from the current type of tourism to the high end type of tourism that will bring more money, with less pressure on the environment,” he concluded.

Standard Chartered Bank, CEO K.O Adenowo, Brought to the attention of the President that he had engaged with him upon his resumption and said “As the oldest bank in The Gambia and a house hold name, we are committed to supporting the government in rolling out its infrastructure program as they  strive to provide the dividends of democracy to the people”.

Standard Chartered Bank served as the only banking partner to Afrexim Bank in its mission to The Gambia.  President Benedict Oramah thanked CEO K.O Adenowo for the long standing personal and professional relationship and for renewing its commitment to the partnership with Standard Chartered Bank.

Standard Chartered hosted the Afrexim delegation who were on a one day working visit to a dinner in their honor.