The Minister of Information and Communication Infrastructure, Demba Ali Jawo, accompanied by the Deputy Permanent Secretary, Mr Malick Jones, on Wednesday paid a familiarisation visit to the offices of the Gambia Press Union.

Upon arrival, the minister was given a guided tour of the Gambia Press Union secretariat and facilities. During the meeting, the GPU President, Bai Emil Touray, expressed delight at the visit by the delegation.

Mr Touray gave an overview of the union’s current projects, activities and the challenges.

He briefed the minister on the progress made on the ongoing joint initiative by the ministry and the GPU to conduct a comprehensive media sector reforms.

The minister, on his part, said he was impressed with the work of the GPU.

“The GPU now is way different. Now, you have all the facilities. I am really impressed. You’re doing really well. There is no excuse for mediocrity in journalism practice in the country now,” he said.

The minister’s visit coincided with the final week of an 18-month training of community and commercial radio broadcasters on reporting on agriculture.

The programme was organised by the Network of Agricultural Communicators [of The Gambia], in partnership with the Danish Food and Agriculture Journalists.

The minister, in his pleasure, encouraged the trainees to use the opportunity to learn as much as possible and to go out and apply the skills that they received in the training.

“Capacity building should be top of your priority now that the field is open. We have about twenty radio stations and there are more licenses to consider. Already, we have a lot of licenses for TV. The market will soon be crowded. You must be efficient to be able to operate in the market,” Mr Jawo said.

The meeting touched on such important issues as the imminent truth and reconciliation commission. It was recommended that the GPU work closely with the Ministry of Justice to sensitise journalists and to come up with a reporting guide on the commission.

Also, among other things discussed, are the challenges confronting the Gambia Press Union.

Minister Jawo, a veteran journalist and former President of the GPU, was in February this year appointed to cabinet by President Adama Barrow. His first public activity was the official opening of the validation workshop of the curriculum for the GPU School of Journalism.

The minister’s Wednesday visit came about one month after the GPU executive paid a courtesy visit to his ministry to discuss issues around the freedom and development of the media in The Gambia.

The Gambia Press Union wishes to express its delight in the minister’ visit of its complex and to the media houses in The Gambia. 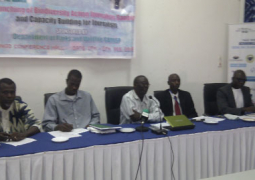