Stakeholders from various line departments of The Gambia government were on Wednesday briefed on the regional programme on sustainable land management and adaptation to climate change in the Sahel and West Africa proposal implementation activities funded by CILLS.

Speaking at the forum held at  the Labato Hotel, Mr. Kanimang Camara, the Managing Director of Natural Resources Consulting Gambia, NACO, who doubles as the consultant for this project gave an overview of the project.

According to him, the project is funded through CILLS, with funding from French Environment Fund and the European Union to a tune of 12.2million Euros.

He said out of the sum total of the amount, CILLS intends to implement ten management projects, based on sustainable land management adaptation to climate change.

He said the reason why the project was meant to be implemented in the North Bank Region is that the region is seriously affected by land degradation, desertification and other related environmental factors. He disclosed that “the project is expected to last for three years.”

For his part, the Deputy Permanent Secretary at the Ministry of Agriculture, Mr Asheme Cole expressed delight at the organisation of the briefing.

He further stated that there is a need for the collective efforts of the project to the already existing projects.

He then used the opportunity on behalf of the Government of the Gambia to thank the CILLS and other development partners for funding the project. 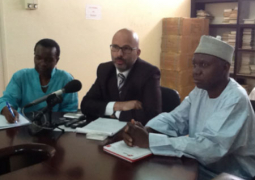