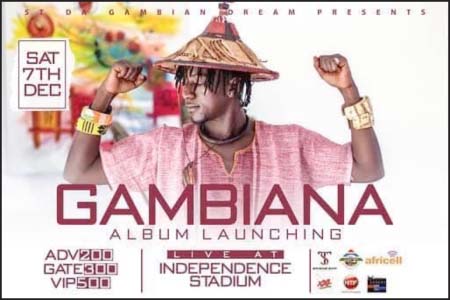 Sanna Singhateh aka ST or better still Brikama Boyo has spoke highly of his new Gambiana album, set for launch on December 7th 2019 at the Independence stadium, Bakau.

With tens of thousands of tickets already sold out, this 8 track-masterpiece represents one of his best artwork.

Filled with a diverse collection of songs, the ‘Gambiana’ album title speaks for itself, as it is a masterpiece that every Gambian can relate to no matter what, while reminding fans of the country’s vast cultures and traditional norms. It also takes listeners through a musical enlightenment, career growth and pure cultural vibes.

ST as he is fondly called remains one of The Gambia’s most celebrated rap musicians since he burst onto the music platform few years ago.

“Gambiana consists of 8 songs and all of the eight tracks are different in genre, message and vibes of music. Also, this album is different because there is lot of expressions on The Gambian way of life, with lots of typical Gambian stories. What I do is to represent my people in all the ways and more so when I do my music, I want it to be something that people can always relate to. There are lots of fusions and local instruments in it, which makes this album a masterpiece,” ST told journalists at a press conference ahead of the album launch.

The album, he said, is a Gambian thing as the name depicts, adding that the album is just amazing, as it talks about Gambia and its people’s ways of lifes.

He recalled that his last album launch (Saluto) was just amazing, but was quick to add that it is not one to be matched with his latest ‘Gambiana’ album.

He continued: “Honestly, December 7 is the much-anticipated event in the country right now and I myself cannot wait personally.”

The rising sensation also reminded that it was time for Gambians to embrace local artistes and give them all the support needed in a bid to propel the industry and promote Gambian music stars on the global stage.

“Since 2013 I have been out there on the top spot of Gambian music and of course I must say that I will be happier to see more stars hitting up the chart because Gambia needs more stars in the industry. It is now time for Gambia to have more stars so that we will not depend on only one star. This is good for the industry and the artists”.

The industry, he stressed, needs lots of stars that Gambians can rely on instead of only one star.