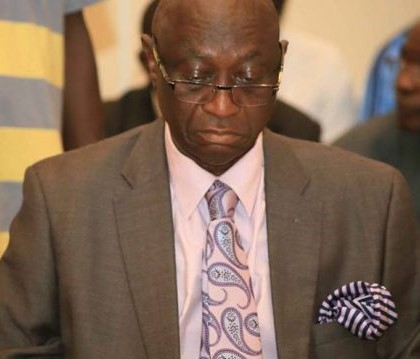 James F. Gomez, the minister of Fisheries and Water Resources has described the fire outbreak which consumed his entire ministry’s building as a wakeup call for government to never operate without backups.

The fire outbreak which commenced after 11 a.m. on Monday 2 December 2019 caused no death or injury but consumed all documents and working materials of the ministry hosted in a building built in colonial days.

According to top officials of the ministry, the cause of the fire was unknown at the time of gathering this report but suspected it could have been caused by an electric spark. The building, the minister confirmed had no fire readiness.

“Our encyclopedia is damaged and we have lost files of every company we had ever done business with”, he stated, adding that they will network with partners to get all documents back and start rebuilding.

He highlighted that government has to lead the way financially to help them rebuild the ministry.

Despite the incident Hon. Gomez said work will go on because they cannot close the ministry as a result of the fire outbreak.

Omar S.M. Gibba, deputy permanent secretary at the Ministry of Fisheries and Water Resources said: “The whole building got consumed by fire, adding that “unfortunately the ministry could not evacuate anything - files, archive, computers and other materials all got consumed”.

He observed it will cost government a lot to restore the information. He highlighted that the damage is estimated at millions of dalasis.

He recalled that last December there was an electric spark at the ministry which was replaced.

Mr. Gibba commended the Fire and Rescue Service for a job well done in putting out the fire.

Dr. Bamba Banja, permanent secretary at the Ministry of Fisheries and Water Resources said the fire outbreak will have tremendous effect on the ministry looking at the magnitude of the information lost.

According to him, “the incident happened at a worse time when we are preparing for 2020”.

“The building has been in existence since colonial days but over time we have been doing some upgrading with the design layout to accommodate more offices as well as with the electricity work and plumbing”, he said.