The Srilankan community in The Gambia on , celebrated the 61st anniversary of at the residence of Shanaka Wijesnghe in Fajara.

Speaking at the celebration ceremony, Binta Singhateh, deputy pernment Secretary for administration and Finance at the Department of State for Foreign Affairs on behalf of the government, thanked the Srilankan community in The Gambia for their contribution to the socio economic development of The Gambia in their various fields.

Also speaking, Shanaka Wijesnghe, a member of the Srilankan community in The Gambia, said on , Srilanka commemorated its 61st Independent anniversary with great pleasure and a sense of pride. He said the 61 years since Srilanka got independence from British rule made it one of the earliest to achieve so among the Commonwealth nations. Mr Shanaka went on to say that as we all know there is a small community of Srilankans living here in The Gambia serving the country in different professional and technical capacities for the well being and prosperity of this nation. " I take this opportunity to thank and pay a generous tribute to The Gambia as a whole and its friendly people, and specially to H.E the president Prof. Dr Yahya Jammeh for providing all of us a peaceful, friendly and a conducive environment to work here," he stated. " I believe that there are so many things in common between Srilanka and The Gambia and we enjoy a closer relationship which is built on mutual respect, trust and understanding," he added.

Mr Shanaka further asserted that he is confident that the existing cooperation and relationship will be further strengthened through closer interaction between the two countries for the continuous prosperity and progress of both our nations. He also thanked H.E. the president of Srilanka Mahinda Rajapakse for leading their country in the right direction and enabling the professionals in Srilanka in diverse fields to share their knowledge and expertise with other nations. "I will fail if we did not pay tribute to our heroic security forces who sacrificed their lives for the defence of our country," he concluded.

The occasion was graced by some Gambian nationals who are friends of the Srilankan Community. 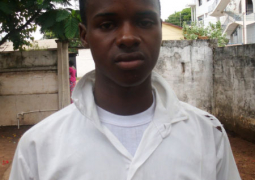 Student seeks support to continue his education to grade 10