Lets Prepare for a New Era of Success

We here at The Point along with all football fans in The Gambia welcome the four-year deal which has been extended to Coach Paul Put. It has been clear even from the short spell he has had with the players that he is a coach of great skill and insight who will no doubt bring success to the Scorpions in years to come. Indeed there was great shock and disappointment that this success was not instantaneous following the historic draw but we were only denied by a highly unpopular technicality.

The signing ceremony was presided over by the Secretary of State for Youths and Sports Sheriff Gomez.

During his statement, Secretary of State Gomez said the government takes sports as fundamental in national development. This is why he had taken the leading step by employing the services of the coach.

He said year 2008 has seen numerous achievements in the Gambian football calendar pointing to the need to keep up the momentum.

This is very far sighted on the part of the government. For too long and indeed in too many countries cheap, second rate coaches have been employed simply to save money. This approach never yields anything other that failure. In football as in so many things in life you get what you pay for.

There is now quite a bit of pressure on Coach Paul Put as he has promised much. To come so tantalizingly close in this year's qualifiers will mean that both government and fans will expect much more next time around. This pressure will be keenly felt by the Belgian but we hope that he handles it with the aplomb with which he seems to have handled it so far. We pray for the success of the team and that we are about to witness the birth of a new, highly successful era in the history of Gambian football. 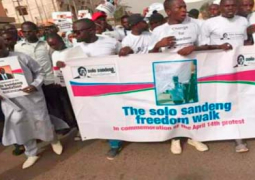