The Sports Journalist Association of The Gambia football team will lock horns with Sierra Leone football team in The Gambia in the semi-final of the Nigeria High Commission’s Golden Jubilee tournament at the Serrekunda East Mini Stadium this morning.

The Gambia sports journalists collected maximum six points in two games to finish top of group B after beating Mauritania 1-0 Thursday in their second game in the tournament at the Manjai Kunda Sports Complex, courtesy of Amadou Wuyeh Manga’s 68th minute strike.

Other semi-finalists Nigeria and Mauritania will battle it out in the semi-final encounter at the Father Gough Sports Complex in Manjai Kunda at the same time today.

Mauritania, who finished 2nd from group B, made it to the semi-final after collecting three points following their 15-0 victory over Libya in their opening game of group B at the Father Gough Sports Complex in Manjai Kunda on 21 September 2010.

Darboe & Co case: State to ‘add names’ to the charge 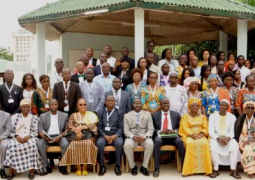