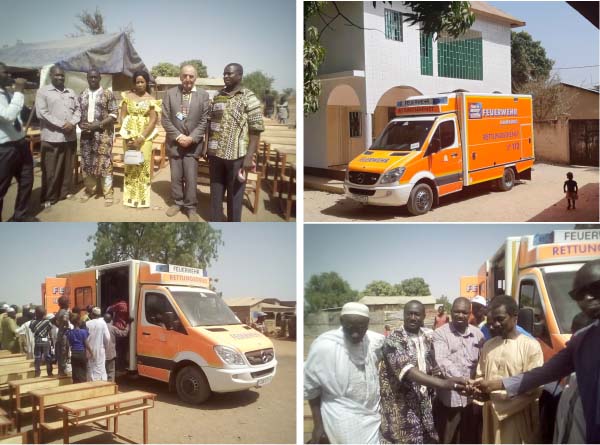 The community of Sare Samba Tacko village commonly referred to as ‘Ndikiri-kunda’ in the Upper Fulladu district, CRR over the weekend benefited from a new state-of-the-art ambulance thanks to a group of philanthropists based in the United Kingdom.

The Ambulance was donated by Mr. Bulert Sener, family and friends . A Turkish based in Hamburg, Germany. The Ambulance worth 12,000 Euros.

In a similar move, the community also received a modest donation of about one-hundred and fifty set of furniture from one Hendry Bebber  a journalist based in UK through Fulladu Foundation.

He described the presentation of the ambulance as a ‘long overdue’, acknowledging that women in the area have been faced with serious challenges especially in getting referrals to Bansang hospital.

Therefore, the coming of this state-of-the-art ambulance, he observed, would not only help the community of Sare Samba Tacko but the entire Upper Fulladu district.

He thanked the donors for the move, further assuring that the Ambulance will be used for its intended purpose.

For his part,Musa Jallow, Chairman of Sare Samba Youth Development Association, hailed the donors for this magnificent gesture, noting that the significance of this new ambulance cannot be over emphasized, considering the distance of the village to the main referral hospital in Bansang.

“This link came about when one of our guests who visited the said village went into labour and was referred to Bansang hospital. Upon arrival at the hospital, she delivered but the child passed away due to the long distant they travelled to the hospital. I want to take this opportunity to advise the youths to maintain unity and hard work”

Jallow also called on health experts to assist the community in keeping proper management of the new ambulance. However, he was quick to clarify that the ambulance is for every sick patient in the area.

Also speaking on behalf of the village heads – Demba Baldeh, acknowledged that arrival of the ambulance is a big boost to the entire Upper Fulladu, considering the fact that it would now reduce the daily drudgery women normally face in assessing the hospital. He thus challenged the people of the area to ensure proper care of the new ambulance so as to serve its purpose.

He observed that for far too long the people of the area have been complaining about ambulance coupled with the horrible road conditions.

He thus appealed to the relevant authorities to help the community with feeder roads to facilitate easy movement of people especially patients during referrals. This, he observed, would also help a great deal in the sustenance of the ambulance during the rainy season.

The new ambulance, he went on, would go a long way in helping timely referrals at Bansang, further disclosing that plans are underway to address the poor road networks in the area.

The Upper Fulladu lawmaker further thanked the donors and the link coordinator, Musa Jallow for making the donation a reality.

Mr. Hendrik Bebber, director, Fulladou Foundation also thanked the community of Sare Samba for the warm welcome accorded to him during the handing over of the ambulance and the furniture.

He lamented that they have been supporting the village of Sare Samba over the years. He added that considering the condition of the women in getting access to hospital for delivery, they found it necessary to give support to the said community in the area of education and health.

The presentation ceremony was graced by government officials, reps from Regional Education and Regional Health Directorates among a cross-section of the community of Sare Samba Tacko.