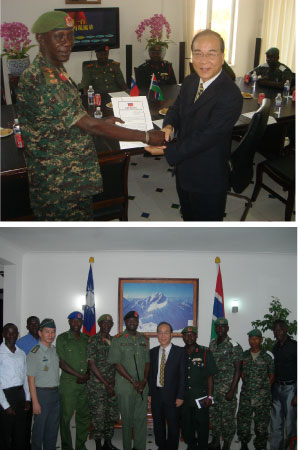 The recipients of the scholarship will be attending military training in War College and the Army Academy, respectively.

The Taiwanese embassy on Thursday evening hosted a farewell reception for the scholarship recipients at the embassy in Bakau.

The 2013 defence scholarship recipients include two senior officers: Col. Paul S Gomez and Lieutenant Conel Baboucarr Jarju, both of whom will be attending one-year training at War College, National Defense University of Taiwan.

The other 2 recipients include cadet officers: Lamin Colley and Pateh Jawo, both of whom will be pursuing a four-year degree programme at Army Academy of Taiwan.

The party was also meant to welcome 3 returning recipients of the 2012 Taiwan Defense Scholarship Programme.

At a farewell and welcome ceremony held at the Taiwanese embassy in Bakau, the departing students were advised by their superiors and the chief Taiwanese diplomat in Banjul to live up to expectations, as they congratulated the returnees for their achievements.

Speaking at the occasion, H.E. Samuel Chen, Taiwanese ambassador to The Gambia, congratulated the students for their achievements and for securing the scholarship.

According to him, the gesture has formed part of the Taiwan Defence Scholarship Programme to help develop the human resource, cultivate military leadership and promote the military cooperation and ties between Taiwan and its allies, including The Gambia.

While stating that there are seven military personnel from The Gambia studying in Taiwan, he said, by the end of the year there would be 19 officers to study at ROC.

For his part, Lt.General Ousman Badjie, CDS, Gambia Armed Forces encouraged the students to work hard and to serve as good ambassadors of the country.

He commended the government of Taiwan for their continuous support to The Gambia and GAF, in particular.

“The Government of Taiwan is spending a lot of resources in you and we expect you to live up to expectations,” he said.

The beneficiaries of the scholarship, who thanked the Taiwanese government for the opportunity given to them, assured that they would take their learning with seriousness.