The event, held at a local hotel in Kololi, was staged to raise fund for the association’s Operation Promote Investment in Education, Agriculture and Health (OPIEAH) project.

Lamin Sima, president of the staff association, described the event as a unique banquette the concept of which he said was invented by music promoter Abdul Aziz Willan.

“This certainly is a night that should never be forgotten,” he said. “We wish to place on record our sincere thanks and gratitude to the president of the Republic and his government for all the support he gave to this programme. Special thanks to GPA [Gambia Ports Authority] and Gamcel for agreeing to be our official sponsors and thanks also go to individuals for honouring our invitation to grace this unique occasion.”

Mr Sima said through the OPIEAH, the SSHFCSA, is sponsoring more than 150 students from high school to the university.

“In the area of health, we have adopted wards in major hospitals throughout the country,” he said.

In agriculture, the staff association has farms in the West Coast Region villages of Ndemban and Jalokoto, and seven villages in the North Bank Region. 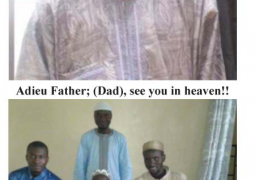