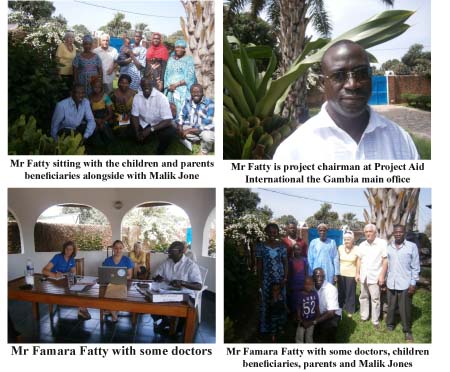 This is the sixth batch that has been sent to Germany through Project Aid International The Gambia, for overseas treatment, as twenty-two Gambian children have now benefited from the package.

Speaking before the departure of the children, Famara Fatty, Chairman for Project Aid International-The Gambia, explained that the project had been operating for about twenty-one years now.

He said the project was known as Jahally Health Centre but the actual name of it is Project Aid International-The Gambia and its main head office is in Manjai-kunda.

Mr Fatty said Project Aid International-The Gambia is focusing on three intervention areas such as health, education and agriculture, adding that health is central in its components.

The project has a health centre in Jahally with enough trained staff and enough medication, he said, adding that most of the time their drugs come from Germany.

He added that Project Aid The Gambia’s motto is: “We don’t want to run out of drugs at all”.

He also said the project has a dental unit attached to Project Aid The Gambia’s main clinic, adding that looking into oral health care of the citizenry, they also discovered that in the rural areas there are constraints faced by people which are impeding their chances of getting such facilities.

Project Aid the Gambia decided to intervene and try to provide a dental unit which would serve people in the rural areas, he said, adding that they also have a kindergarten which constitutes their educational component and it currently enrols 322 students, mainly in Jahally and its catchment areas in the Central River Region South.

“We also have a horticultural component which has four horticultural gardens for the womenfolk of the community of Jahally and Madina,” he disclosed.

This was to help them to have decent living, as the level of poverty was high in the rural areas, he said.

Mr Fatty further said that in 2012, Project Aid The Gambia decided to cooperate with another NGO in Germany called Peace Village International, an International NGO based in Germany, which started after the Second World War, trying to help victims of the war, as well as helping poor people with medical condition that cannot be treated in their countries of origin, and Project Aid would evacuate them to Germany and give them the necessary treatment at no cost.

The Gambia is not the only country taking part in this treatment, he indicated; other countries, including Angola and Afghanistan, also send children to Germany for treatment.

Samba Bah, whose son was a beneficiary of this package, thanked Project Aid The Gambia for the gesture, saying this was a big relief for him.

He disclosed that his son had been suffering a lot as a result of hand pains, but thanks to the intervention of this project his son was well treated in Germany.

Other parents who spoke to this reporter expressed “total satisfaction” with the intervention of Project Aid The Gambia.

Mr Bah said the project would do everything possible to complement government’s efforts through health delivery services.