Europe was the scene of a conflict between religion and science, because the church there had arbitrarily embraced certain theories and dogmas (inheriting them from Greece) and insisted that they were sacred and a gospel truth. So when the theoretical and the empirical science demonstrated the error and fallacy of these theories, the people there had no other course but to believe in science and disbelieve in the church as well as in the religion these churchman stood for. The war between religion and science gained in intensity and the enthusiasm to get free from the dominance of these religious men increased as the church in Europe conferred upon itself divine power and proceeded to enforce it in a most tyrannical manner. Thus for the people there religion came to signify an abominable ghoul that harassed them in their working on less than in their sleeping hours. It exacted from men costly extortion and reduced them to an abject state of subordination to the churchman, besides calling upon them to swallow nonsense and superstition in the name of God. The torturing of scientists and burning them alive because they said, for instance, that the earth was round, was the ugliest of crimes that made it a sacred duty of every sensible, free-thinking and conscientious individual there to come forward and help the forces that sought to destroy this abominable ghoul or at least put it in chains so as not to let it ever again harass and oppress the people besides harming the cause of religion by misrepresenting it and making others feel as if religion contained nothing but falsehood and untruth.

But what about us, wee who live in the Islamic East? Why should we separate science from religion or hold that the two are at variance and war with each other? Is there even a single scientific fact which has been found to contradict Islam and its basic creed? Were scientists ever subjected to persecution in the domain of Islam? The whole history of Islam is before us. It testifies that there have been great doctors, astronomers, mathematicians, physicists as well as chemists but never were they persecuted for their views. There is no trace of any conflict between science and their religious beliefs to be found in the minds of these great Muslim scientists. Nor did they exist in any hostilities between them and the ruling authorities such as might have led to their suffering or burning alive.

What is it that makes these “educated” people plead for separation of religion from science, for attacking Islam and finding faults with it without any understanding or knowledge of it? Their feverish crying is nothing but a symptom of the poison that had been administered to them by the imperialists, of course, without them knowing it.

This class of the “educated” elite was not at all in my mind when I wrote this book. They would never return to what is right until their masters in the West also do turn towards it after despairing of their Godless materialistic civilization and recognize that it can bring them no salvation, and so return to a system of life that is at once spiritual as well as practical-a system embracing belief no less than life at one and at the same time.

I had rather another class before me in writing this book- the sincere and enlightened youth, who earnestly wish to find out the reality, the truth, but the doubts and lies spread about Islam by the deceitful imperialistic powers leave them helpless to see the light, or the answer to these lies, and so they are left groping about in darkness, for the slaves of imperialism and the devils of communism would not let them march out to the right path- the path to freedom,, honour and sublimit. It is to this enlightened and sincere group of young men that I present this book and hope that it may please God to help me dispel doubts about Islam from their minds.

IS RELIGION ANTIQUTED
Dazzled by the achievement of science during the 18h and 19th centuries many westerners thought that religion had exhausted all its usefulness and surrendered to science once for all. Almost all the eminent western psychologists and sociologists expressed themselves in similar terms. Thus Freud, the renowned psychologist, for instance, showing the futility of any advocacy for what religion stood for in modern time says that the human life passes through three distinct psychological phases; superstition, religion and science. Now being the era of science all religion was out of date.

As we have already explained in the Preface there were certain causes which led the men of science in Europe to adopt a view of life antagonistic to religion, and based on its hatred. It was due to the great controversy that raged there between men of science and the Christian church which made them think– quite justifiably of course – that whatever the church stood for was reactionary, retrogressive, backward and superstitious, and that therefore it must of necessary vacate it seat for science so as to enable humanity to move ahead on the path of civilization.

Without appreciating the difference between the peculiar conditions of life obtaining in Europe at the time of this unhappy conflict and those in their own Islamic orient, people opposed to their sacred tradition handed down to them from past generations demanded their outright abolition. Then came the contagion of imitation which plagued the domination Islamic orient and led the naive among its people to fancy that the only way to progress was that followed by the dominant nations of Europe, and that they have to discard their religion just as Europe had already done failing which they feared that they would be trapped in an abyss of reactionarism, backwardness and humbug.

But such people overlooked the fact that even in the West not all the outstanding scholars were antagonistic towards religion, nor do their works exhibit anything of this sort. On the other hand, we find some intellectuals among them of great eminence, who, freed of the materialism of the Godless Europe, were drive to the conclusion that religion is a psychological as well as an intellectual necessity for mankind.

The most notes figure among them is the astronomer, James Jeans who start his intellectual career as a Godless sceptic but was led finally by his scientific exploration to the conclusion that the greatest problems of science could not be resolved without believing in God. The famous sociologist, Jeans Bridge went so far as to eulogize Islam for achieving a successful amalgam of the temporal with the spiritual into a harmonious system of thought blent with a practical code of life. The well-know English writer, Somerset Maugham epitomized the whole attitude of modern Europe towards religion when he remarked that Europe had in the present era discovered a new god-science, discarding the older one.

The god of science has, however, turned out to be extremely fickle, ever changing and constantly shifting positions, upholding today as a fact and reality what it rejected yesterday as false and spurious and vice versa, with the result that we see its “worshippers” doomed to a fate of perpetual restlessness and anxiety, for how can they find rest and peace of mind under such a capricious god? That is constant restlessness with which the modern west is afflicted is a fact, is borne out by the large number of psychological and nervous disorders that are so common in the western community of today.

A still another result of this deification of modern science is that the world we live in is devoid of all meaning and purpose with no higher order or power to guide it, with a persistent struggle ever going on between opposing forces. As result, everything in this world suffers change; economic and political system change; relations between state and individuals alter; even scientific “Facts” do change. What can man expect save misery and perpetual restlessness in a world with such a sombre setting where no High Power exists whom he should turn to for support, strength and comfort in this ruthless struggle of life...... 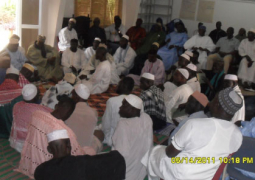