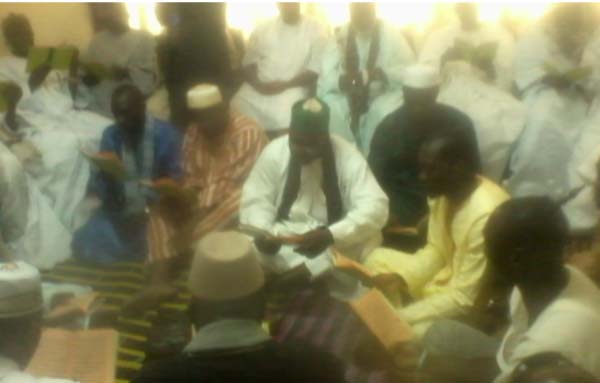 Religious leaders led by the Imam Ratib of Banjul, Alhagie Cherno Alieu Mass Kah, yesterday converged at the Embassy of the Republic of Sierra Leone in The Gambia to offer prayers through recitation of the Holy Quran to end the deadly Ebola virus which has so far cost the lives of hundreds of people in the affected countries in West Africa.

The deadly Ebola virus is seen as a terrifying disease, which has promptly called for international attention for its eradication.

The recitation of the Holy Quran organised by the Sierra Leone Ambassador to The Gambia, His Excellency, Soulayman Daramy, was to offer payers to end the deadly virus and to stop it reaching to other unaffected parts of the world, as well as maintain speedy recovery of people already suffering from the virus.

The prayers, according to Ambassador Daramy, came as a directive from his President, His Excellency, Ernest Bai Koroma, who urged his partners to do all they could to help in order to see the end of the deadly Ebola virus in the affected nations.

Ambassador Daramy revealed that when they got to realize the epidemic, President Koroma called for a moment of reflection and prayers for the people affected in his country, likewise in the sub-region.

He said a directive which they accepted and look forward to by calling on the Imam Ratib, the Supreme Islamic Council and other Imams which led to the recitation of the Holy Quran.

He however revealed that in the beginning the disease was not that much serious, because the people did not know much about the disease, adding that it was at the time it started spreading that they were able to have experts to explain the disease to the people.

He commended his government with the cooperation and assistance from the international community for their tremendous work to fight the disease.

He added that when the outbreak was realised they had closed schools, stopped public gatherings, and suspended football games until further notice while the military and the police are also doing their efforts to the fight against the disease.He said he hopes and prays that Allah would answer the prayers and further pleaded with the Imams for their continued prayers to stop the epidemic.

Imam Ratib Kah thanked the Ambassador and his government for the idea and further reminded the gathering that prayer is the weapon which Muslims have in seeking God’s mercy and blessings. He further said they have been praying for the end of the virus since the starting of the outbreak, adding that they would continue to pray to God for its eradication and the recovery of the affected ones.

The secretary to the Banjul Muslim elders committee, Sheikh Alhagie Alieu Mboge, described the significance of the gathering, highlighting that it was deemed fit to converge and seek Allah’s blessings for the end of the virus in the affected nations.

He added that the prayers however served not only to end the epidemic, but also to prevent it from affecting other nations in the world, likewise a speedy recovery for the already affected.