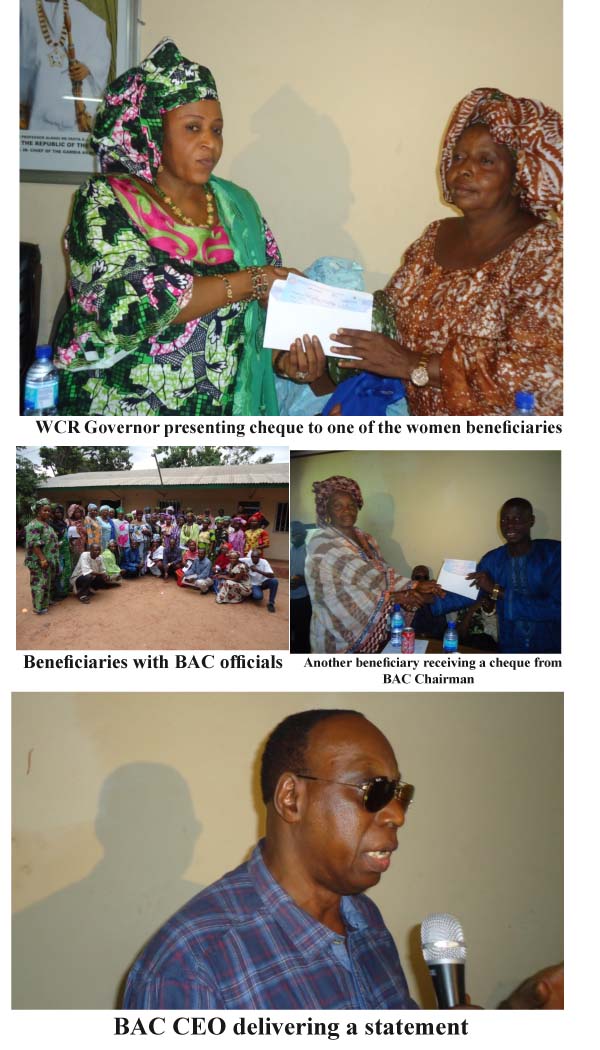 The management of Brikama Area Council (BAC) has been responding positively to President Jammeh’s call to end Gambia’s decades-long rice importation by 2016.

According to officials of the BAC, based on the positive foresight of President Jammeh and his slogan to end rice importation by 2016, the council deemed it necessary to contribute their quota towards complementing that effort by providing a token of two cheques amounting to D110,000 to support West Coast Region women farmers.

The presentation, held at the BAC chamber conference hall, was part of the council’s contribution towards the realization of Vision 2016 of food self-sufficiency, an initiative of the government.

According to council officials, the cheques were meant to be shared in nine districts in the West Coast Region to support them in attaining Vision 2016, to end Gambia’s decades-long rice importation into the country.

He said the initiative to end rice importation by 2016 was a step in the right direction and should be supported by every patriotic citizen of the country.

CEO Manneh advised the women to continue their cooperation and redouble their effort towards national development, particularly in pushing the 2016 agenda forward to realise the President’s vision of food self-sufficiency in the country.

The Chairman of Brikama Area Council, Bakary Saibo Sanneh, expressed delight to be associated with the event in presenting a cheque for over 100,000 to the West Coast Region women farmers to aid the attainment of Vision 2016.

He said it was possible to attain Vision 2016, and all what is needed is resources, adding that this was why BAC deemed it fitting to start the ball rolling and come up with a token to support the West Coast Region women farmers to realise the President’s dream.

The BAC boss further said Gambian women are worthy to be supported as they contribute about 80 per cent towards any development the country is striving to attain.

He seized the opportunity to thank President Jammeh for creating an environment conducive for his foresight and initiative, which is here to stay.

Also speaking, Isatou Jifanga Jarju, National Women Mobiliser, commended BAC for being the leading and the first council to contribute such an amount of money towards the realization of Vision 2016 food self-sufficiency, an initiative of the government through President Jammeh.

She thanked the entire Gambia women for their level of preparedness in responding to the President’s vision to end Gambia’s decades-long rice importation into the country.

Madam Bintou Gassama Jammeh, deputy permanent secretary, Office of the Vice President, expressed delight about the move that the BAC has taken by giving a token sum to the women farmers of West Coast Region.

She said the President’s vision to ensure Gambians do not import what they eat should be taken as a policy decision and should be the responsibility of all and sundry to ensure the vision is realised.

According to her, the President’s initiative was geared towards supporting the Gambian population; therefore BAC coming up with this token of appreciation towards that vision is something that should be acknowledged and worthy of emulation by other councils and people in the dissapora.

She commended the BAC for this laudable initiative and encouraged the women to be always at the forefront of President Jammeh’s initiatives.

The governor of West Coast Region, Aminata Saffai Hydara, commended Brikama Area Council through the chairman and the CEO for being at the forefront in supporting the West Coast Region women farmers to end Gambia’s rice importation into the country.

She hailed President Jammeh for his foresight and the heart he has for the Gambian people.

The first Gambian female governor further commended the women for their hard work for being always at the forefront in implementing President Jammeh’s initiatives, while challenging the Gambian women to redouble their effort in achieving the President’s vision by 2016.