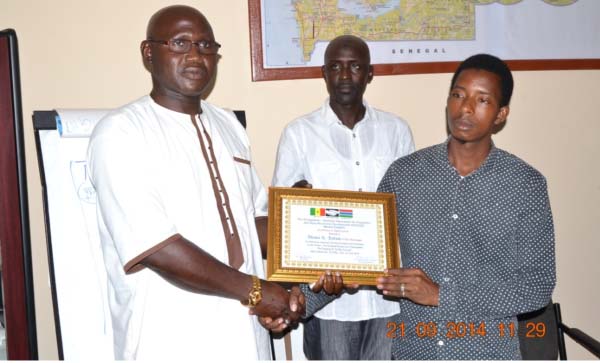 The Senegal-Gambia Association for Integration and Socio-Economic Development (SGAISD) Banjul Chapter over the weekend gave an award to The Point newspaper, among other key institutions and individuals, certificates of appreciation in recognition of the effective coverage given to the association’s two-day symposium and conference held recently in Banjul.

The outstanding journalist awardees included Adama K. Jallow of The Point newspaper, Lamin Cham of The Standard newspaper, Baboucarr Camara of the Daily Observer and Malick Jones of the Ministry of Information.

Other awardees were two of the associations’ resource persons, Dr. Pierre Gomez of the University of The Gambia, and retired ambassador Ebou Momar Taal, as well as Gambian tertiary and university students who participated during the event.

The ceremony also witnessed the disclosure of the newly-formed sister associations’ advisory board to be launched later in Dakar Senegal, according to sources.The gathering was also told about the planned launching of the first book titled: “The Historic Senegambia and the Prospects of Integration” co-authored by prominent members of the sister associations.

The book looks at the historic perspective of Senegambia, the prospects and the way forward through integration.