Stop Malaria Foundation, a Spanish-based charitable organisation, in collaboration with Global Unification the Gambia recently donated 30 insecticide-treated bed-nets to TAWFIQ Boarding School, at a ceremony held in Mandinaring Village in Kombo North district.
The donation was part of an ongoing campaign, dubbed 'Stop Malaria,' aimed at fighting against malaria in the Gambia through bed-nets distribution to poor communities, training and bed-net dipping, among others.
The Principal of TAWFIQ Boarding School, who received the donated items, thanked the Spanish team for their wonderful gesture. He highlight that the donation had come at the time when the children of his school were in need of bed-nets, most especially, during the rainy season when mosquitoes are most prevalent.
Neomi Fuster Rabat, the Project Co-ordinator in Spain, advised the beneficiaries to put the bed-nets to good use. She also promised to provide more support to the community of Mandinaring.
Fatoumata Bah, the Project Co-ordinator in the Gambia and the National Treasurer of Global Unification National, commended the community of Mandinaring for the warm welcome. She also expressed her satisfaction with the Spanish team for choosing the Gambia, and in particular, TAWFIQ Boarding School for the kind gesture.
According to her, a single bed-net donated means a lot, since it save lives of children who will grow up to become responsible citizens.
Other speakers included Ebrima Dem, Pa Jobe of the Global Unification, and the Deputy Youth Welfare Co-ordinator. 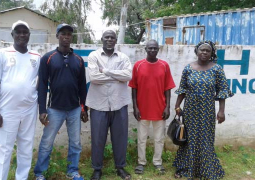