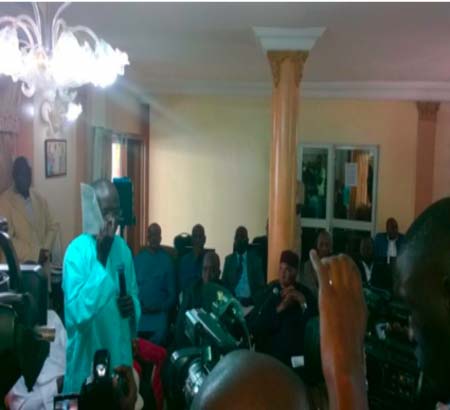 The Senegalese Democratic Party (PDS), the former ruling party, is currently in turmoil after a meeting held at former President Abdoulaye Wade’s home in Fann Residence, a suburb of Dakar, ended in acrimony.

The meeting held on Tuesday afternoon, was at the request of former Health Minister Modou Diagne Fada, who is also the parliamentary leader of the PDS in the National Assembly, who said the objective was for the leadership to discuss how to restructure and rejuvenate the party.

He had recently been quoted in the media of criticizing the idea of choosing Karim Wade as both the presidential candidate and Secretary General of the PDS.

In his response to the situation, former President Wade said even though he had no objection to a meeting to discuss restructuring of the party, but that Diagne Fada and his group should not have spoken to the press about their intentions before discussing the issue with the party executive.

In his reaction to the situation, Diagne Fada has threatened to take the matter to court if Farba Senghor repeats the accusations he made against him.

He further argued that if during Abdou Diouf’s time while he was a young radical student leader they were unable to corrupt him, it is not possible that Macky Sall or anyone else can corrupt him now.

He however vowed that he remains a member of the PDS and that no one can cause him to leave the party and no one can also expel him from the party.

The drama has once again rekindled the debate amongst political analysts that the PDS is on the verge of disintegration into different factions.

This is no doubt being hastened by the decision to choose Karim Wade as the party’s next presidential candidate while he is serving a six year sentence for corruption, and that choice does not seem to go well with some members of the party hierarchy.

Recently for instance, one of the strong pillars of the party, Aida Mbodj, has made plain her opposition to the choice of Karim Wade as the party’s presidential candidate.

There has also been general dissatisfaction amongst some party supporters of that decision, while Karim’s father; former President Wade still clings on as Secretary General of the party.