The Gambia Football Association has expressed their intention to report to the world football governing body, FIFA about the suffering of the Scorpions in Algeria last Friday, in the qualifiers.

This was made known to Pointsports by Jammeh EK Bojang Secretary General of The Gambia Football Association. He said following a report presented by the head of delegation for the Gambia/Algeria game played on Friday June 20th 2008 in Algeria, in the World and African Cup qualifiers, the FA have written a worded letter to FIFA bringing to their notice the suffering of the Gambian players in Algeria.

He said the Scorpions received numerous ill treatments in Algeria ranging from being pelted with stones to a knife being shown to Gambian players during the field of play.

"We asked FIFA to address and curb these ills in football which are not in the interest of fair play. As you will fully recall that we wrote a letter on June 16th notifying them of the treats made by Algerian players in Banjul," he concluded. 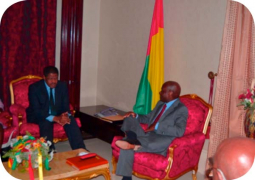