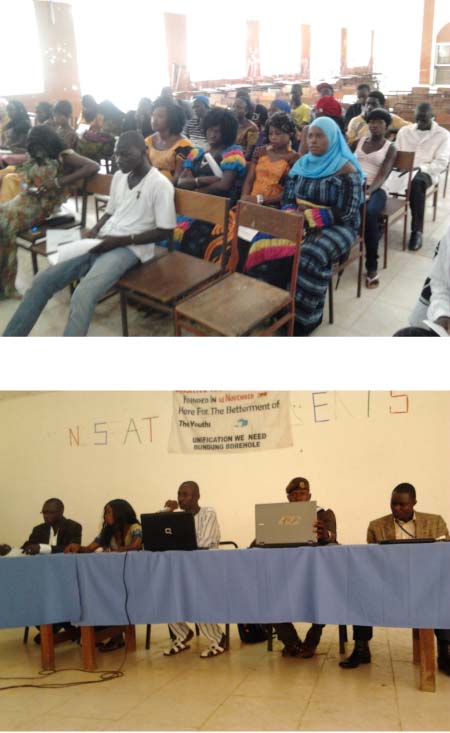 Youth in The Gambia yesterday joined the rest of the world to mark International Youth Day (IYD) with a symposium held at Nusrat Senior Secondary School in Bundung.

In a speech delivered on his behalf by Beakanyang Kafo secretary general Nfamara Jawneh, Beakanyang president Tumani Danjo said that IYD, being observed on 12 August each year, was established by the United Nations in 2000 as a means of raising awareness on issues affecting young people around the world.

“Each year the Secretary-General of the United Nations decides upon a theme for the Day on the basis of issues of concern to young people,” he said.

According to Mr Danjo, the day is also meant to recognize the efforts of the world’s youth in enhancing development.

“It also aims to promote ways to engage them in becoming more actively involved in making positive contributions to their communities. In The Gambia Beakanyang and our partners Sensitive Youth Association are proud to co-organize this event to celebrate the Day,” he said.

He noted that Beakanyang is a youth-led organization promoting human rights, environmental sustainability and agriculture focusing mainly in rural Gambia.

Commenting on the theme, Danjo said young people make up a significant share of the global number of international migrants.

In fact, according to records, in 2010, there were an estimated number of 27 million international young migrants, he said.

According to him, while migration can often offer valuable opportunities and contribute to the development of communities and society at large, it can also pose risks and lead to unacceptable situations, including discrimination and exploitation.

For her part, Isatou Conteh representing the chairperson of Sensitive Youth Association said the day was meant to reflect on the daily lives and challenges of youth globally.

She said her association would remain committed to nation building as a true development partner.

The group, she added, is using various strategies to empower its members such as entrepreneurship trainings, environmental sanitation, advocating for youth rights and against social menaces like illegal migration and drug abuse.

Deputizing the Director General of The Gambia Immigration Department, GID PRO Cadet Inspector Saidou A.M. Bah applauded the organizers of the forum for a worthy gathering.

He urged young people to desist from embarking on illegal migration because it is associated with so many risks.

According to him, the government is doing a lot to encourage the youth to stay and work in the country through institutions and schemes such as NYSS, President Award Scheme and NEDI.

The challenge now is for the youth to grab these opportunities and stop risking their lives when they could make it in their homeland, PRO Bah said.

According to him, during the Libyan conflict, the governments through the leadership of President Yahya Jammeh repatriated many Gambians trapped in the North African country “but sadly many of those repatriated decided to go back through illegal migration”.

PRO Bah stressed that neither GID nor The Gambia government is opposed to youth migrating but was quick to add that such movements should be done legally.

The occasion, moderated by Kebba Jephang, secretary of Sensitive Youth Association, was attended by representatives of various youth groups in the country.

The rise in the price of sugar