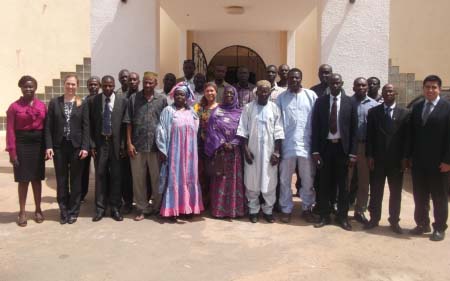 The was project launched on 20 June 2012, and the SCEDP provides specific support for the cashew, groundnuts and sesame sectors and consists of three component sectors such as development, trade information and inclusive tourism.

As the project is nearing its end in December 2015, it is needed to prepare local stakeholders for the handing over of the project outputs to ensure sustainability, prompting the National Implementation Unit (NIU) of the EIF to convene the forum held yesterday at the Ocean Bay Hotel in Cape Point Bakau.

The participants came from various partner institutions such as WAAPP, NARI, GiEPA, EU, NNDP and GCCI, among others.

In her opening speech, the permanent secretary at the Ministry of Trade, Industry, Regional Integration and Employment (MOTIE), Ms Naffie Barry, said the project launched on 20 June 2012, has a total budget of $2.4 million and a lifespan of three years.

It aimed at responding to some of the trade-related development priorities identified in the Diagnostics Trade Integration Study (DTIS), she said.

Mrs Barry pointed out that the project was funded by the EIF trust fund and implemented by the International Trade Center (ITC) in collaboration with partners, including the EIF Programme National Implementation Unit (NIU) under MoTIE.

Given the fact of the relatively small size of the domestic market in The Gambia, she said, significant growth in the economy would benefit to a large extent from sustained export development.

“The main exports’ constraints that the project has been trying to address include poor quality of agricultural products, limited access to trade information, poor linkages of agriculture and tourism industry and lack of proper processing and packing capabilities.”

According to her, the project has also tackled these constraints through sector strategy, development of cashew nuts and sesame and quality enhancement to increase export opportunities for cashew nuts, the groundnuts and the sesame sectors.

According to PS Barry, it also includes the establishment of a Trade  Information Network (TIN) and assessment of the potential for the  development of inclusive tourism activities in The Gambia linking horticulture, poultry and handicrafts with the hotels industry.

She expressed the government’s support and commitment to stakeholders to ensure the results are sustained for the benefit of the people.

Elisa Luotonen of the International Trade Centre also associate expert Office for Africa, revealed some of the objectives of the project which include poverty reduction through strengthening sector competitiveness, promoting new business opportunities in domestic, regional and integration markets and to generate additional incomes and employment creation.

She further disclosed the project’s duration, budget, sectors and donor, its components, sustainability measures taken by the project, way forward, types of existing resources available and thematic areas of discussion.

U-17 to Participate in Nigeria Academy Football Tourney

BIBLICAL REFLECTIONS: THE CROSS OVER