The Kanifing Rent Tribunal recently fined one Ebrima Sariang Saho, a landlord in Bundung Borehole, the sum of D5,000 for increasing house rents in his compound without due approval of the Municipal Rent Office.

Presided over by Magistrate Sanyang, the court informed Mr. Saho that increasing or attempting to increase rent of his houses within the Kanifing jurisdiction, without prior endorsement of the rent office, constitutes a contravention of rent regulations, punishable by a fine of D5,000.

This development came, following the landlord's application to the court to evict three tenants, on grounds that the tenants were not living in the compound cordially with his family.

A third defendant had an additional charge for non-payment of rent for three months, amounting to D3,600 at D1,200 per month.

The defendants in their testimonies told the court that the landlord has been treating tenants arbitrarily, and without due regard.

An instance of such arbitrariness was increasing the house rent from D1, 200 per month to D2,000.

Magistrate Sanyang in his judgment told the landlord that any increment on house rent has to follow due procedure in conformity with the rent regulations of the country.

"The Rent Office has to be formally informed, following which a fact finding assessment of the property is conducted to consider the proposed rent increment against the facilities available therein. Without observing this procedure, you cannot increase your house rent," Magistrate Sanyang announced.

The court heard the landlord (Ebrima Saho) complain that he (Saho) lives in , and had entrusted the administration of his compound to an agent called Amadou Danso.

"It is Mr. Danso's wife who is not harmoniously living with almost all families living on this property. As such, he said, he is disturbed personally, particularly when he is away at work back in .

"Mr. Danso is fond of consistently disturbing him with calls and complaints, and with stories about his wife's problems with the tenants in the compound," said Saho.

After hearing from both parties, the court gave a 'notice to quit' to the tenants after questioning their stance on the landlord's wish for them to quit.

They agreed to do so, but added that they needed time to find a house within a reasonable period.

The court ordered them to do so within three months, while paying rent for the period they stay in the landlord's house. 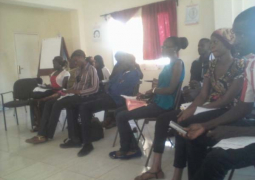