Standard Chartered Bank has announced a ninth successive record first half of profit, with income growing by 11 per cent to US$8.76 billion as profits climbed 17 per cent to US$3.64 billion.

According to a press release sent to The Point yesterday, the group produced diverse and resilient income growth across a number of products and geographies driven by recent investment in new product capabilities and income streams.

The release stated that customer deposits grew by 19 per cent or US$55 billion to US$343 billion, with the advances to deposits ratio remaining strong at 78.1 per cent. The group continues to be highly liquid, with US$150 billion of cash or near cash assets, while they also have no sovereign debt exposure to , , or .

“Standard Chartered continues to support economic growth and development across our markets with total lending climbing by 22 per cent and lending to SMEs up 38 per cent,” the release stated.

The quality of the bank’s customer lending continues to improve, with 67 per cent of the Wholesale lending book having a maturity of under 12 months while the average loan-to-value on the mortgage book remains low at 49 per cent.

“Wholesale Banking loan impairments rose 46 per cent to US$201 million in the same period,” the release stated, noting: “We remain disciplined and proactive in our approach to risk management.”

According to the release, the geographic performance of the bank has been broad and well spread.

“With the exception of , all regions have shown good increases in income, with Hong Kong up 29 per cent, and 20 per cent higher,” the release stated. “Operating profit and income in fell by 39 per cent and 12 per cent respectively, driven by rising interest rates and increasing competition resulting in falling net interest margins.”

Wholesale Banking and Consumer Banking saw increased business activity across a number of products and services, as the Group captured market share from their competitors, the release also said, adding that Consumer Banking performed strongly in the first half with income and profit growing 15 per cent and 58 per cent respectively, as “the transformation programme progresses well”.

The release also stated that as the emerging middle class continues to expand, the high value segments of private banking, priority banking and SMEs banking all grew at more than 10 per cent.

“The Wholesale Banking saw client income grow by 9 per cent to record level of US 4.44 billion, while the overall first half income and profit levels grew by eight per cent and five per cent respectively, also to record levels,” the release noted.

“Client income now accounts for 82 per cent of Wholesale income. We continue to support trade and investment flows to and from our markets, investing in new product and service sets to meet client demand, whilst further broadening the income base.”

The release continues: “Trade finance income grew by 11 per cent, foreign exchange by 19 per cent with commodities and equities growing by 93 per cent, while the capital markets business grew income by 16 per cent.

Cash management volumes continued to build, up 26 per cent, with income up 33 per cent. Wholesale Banking continues to grow income and profit, whilst maintaining strong cost and risk controls, and with robust transaction pipelines for the second half of 2011.” 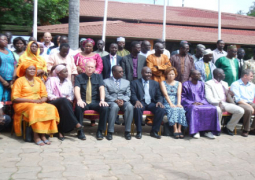