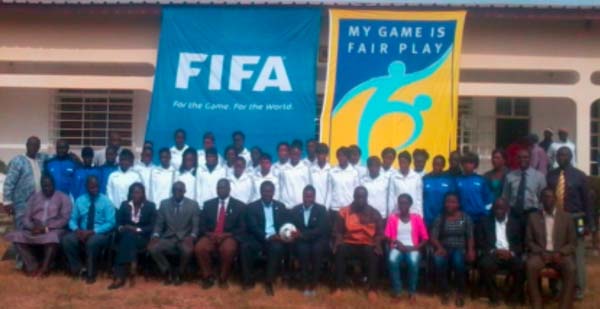 In his opening statement, GFF President Lamin Kaba Bajo said the training course aimed at building the capacity of Gambian female football technicians, with the overall objective of supporting and developing women’s football in the country.

The GFF in compliance with new realities has developed and submitted a four-year women’s football development strategic plan document 2015-2018 to FIFA, which contains various programmes and activities that would be supported by FIFA and other partners to be implemented during this period, Bajo announced.

He said they are aware of the strategic purpose of promoting women’s football through FIFA’s support, noting that the initiative is called “Meet Your Goal Initiative.”

The Gambia Football Federation will collaborate with FIFA to set and implement this initiative in the country, he declared.

The GFF intends to use the training programme to achieve and communicate to the young girls of the country about the available option to go and play football for the country.

During the past few years, the GFF realized that there are many training participants in the country and, therefore, the need to develop women’s football in The Gambia to also cater for their needs in the overall GFF football development strategic plan.

Bajo announced that the 26 participants gathered include national team elite players who are supposed to be encouraged and supported to pursue a career in coaching and football- related activities. This would also serve as an immediate pool of talent that would ensure that they engage in the development of players, including improving their technical understanding of the game and knowledge.

The national team players attending this training course would also help to raise their profile and competence, and they would also be encouraged to stay in the game after their football career, and offer an opportunity for their continued involvement and contribution in the development of women’s football.

In addition to the technical training course, Bajo said a girls’ festival will be held on 19 December, which brings more than 240 girls to play football and talk about football.

Alagie Marong, representing the Minister of Youth and Sports, said the Gambia government believes that sports is not only for men and, therefore, it has also supported women’s football over the years.

FIFA course instructor Jacqueline Shipanga from Namibia expressed delight with the new GFF leadership for recognizing the importance of developing women’s football in the country.

According to Ms Shipanga, FIFA under Josep Blater’s leadership has “a very special place for women’s football”, and which is growing bigger and larger.

She pointed outthat women’s football now takes place in the Olympics, and hoped The Gambia will be involved in the matches for the upcoming Women World Cup in Canada, in which four African countries will be participating.

She was delighted to be associated with The Gambia, which qualified for the FIFA U-17 Women’sWorld Cup in Azerbaijan, two years after she first conducted the same course for Gambian women technicians.

GFF Secretary General Abass Bah said the day marked a very important milestone for the development of the women’s football in the country.

The GFF secretariat is committed to the implementation of programmes and policies approved by the GFF executive and FIFA in the overall development of women’s football, he added.

Women’s football under the new GFF bureau has taken center-stage in the short and long term strategic plans, Bah declared called on stakeholders to partner with GFF.

TheGFF secretariat is also committed to having qualified staff that can deliver programmes at all levels, and the course will serve as a building block for a holistic development of women’s football programmes, Bah went on.

Coaches training is the foundation and the factory that can build a very qualified and talented football team that can bring glory to the country, he continued.

The GFF official thanked FIFA and the course coordinator, Jacqueline Shipanga, MoYS and all partners for giving GFF time and resources to implement the programme.

The Gambia government through the Ministry of Youth and Sports has supported women’s football as demonstrated during the FIFA Women’s World Cup in Azerbaijan.

She also spoke of energy and resources coming from individuals and organizations toward ensuring the national U-17 women’s team’s preparations for the Azerbaijan tournament.

FIFA and CAF have also been supportive through their various interventions, such as capacity building training for women coaches, referees and for women football administrators at all levels, Ms Mbenga added.

Choro Mbenga and Mariama Sowe have gained much knowledge from training facilitated by CAF and FIFA toward the development of women’s football in The Gambia.

She expressed hope that this technical and women’s festival will go a long way in the further development of women’s football in the country. 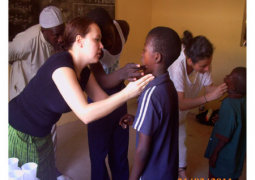