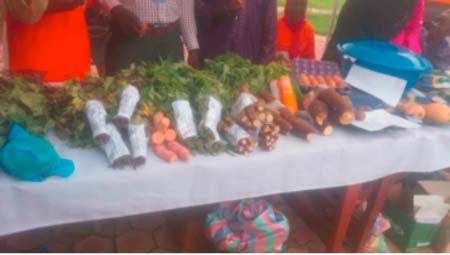 The project aims at improving the nutritional and health status of vulnerable populations from micronutrient deficiencies throughout The Gambia, particularly targeting women, girls and children in the North Bank and Central River Regions.

This is expected to contribute to improvements in health and nutrition indicators, especially the reduction of stunting and wasting and normal cognitive development in children and reduce anemia among women, as well as reduction in complications during pregnancy and maternal mortality.

Mooshibudi Rampedi, FAO country representative said the awareness raising campaign could not be launched at a better time, as it coincides with the World Food Day celebrations under the theme: Healthy diets for a Zero Hunger world.

“Nutrition is one of the most important contributors to human health. People who eat whole foods rich in nutrients live longer and are protected against many chronic illnesses and over the years, the government of The Gambia and partners worked hand in hand to reduce acute malnutrition and stunting from 24.4% in 2010 to 19% in 2018,” she stated.

Madam Rampedi however stated that more needs to be done while malnutrition remains a major challenge in The Gambia.

She said micronutrient deficiencies or “Hidden Hunger” such as Vitamin A, Iron, Anemia and Iodine deficiency disorders are major public health concerns in The Gambia, saying that similarly, these affect mostly children under the age of five and women of reproductive age mainly due to inadequate intake of micronutrients from the daily diet.

“The good news is that opportunities exist to fight against malnutrition and especially micronutrient deficiencies. As a specialised United Nations Agency with a mandate to help countries eliminate hunger, food insecurity and malnutrition, FAO is uniquely placed to support countries to strengthen their policy and institutional environments so that their political commitment can be translated into concrete action,” she added.

Darrell SEXSTONE, Programme Manager of the European Union (EU) Delegation said the effects of poor nutrition represent one of the most serious and preventable tragedies of our time.  “Indeed, the World Health Organization considers that poor nutrition is the single most important threat to the world’s health. In many developing countries it is an underlying cause of at least one third of all child deaths and 20% of maternal mortalities every year,” he lamented.

He further narrated that progress is being made adding that statistics released in the not too distant past showed that globally, around 165 million, or a quarter of the world’s children, suffer from stunting and 2.6 million children under the age of five die every year as a result of undernutrition.

Muhammadou Lamin Jaiteh, PS office of the V.P said that effective and sustainable food fortification and bio-fortification are crucial interventions for the prevention and control of malnutrition especially micronutrient malnutrition.

He stated that Social and Behavioural Change Communication materials were developed to promote the consumption of the fortified and bio-fortified food as well as ensure the diversification of our diet in general and it is in that regard that stakeholders in the implementation of the SBCC programme are embarking on a caravan tour of the country to sensitize the public on the benefits of fortified and bio-fortified food.